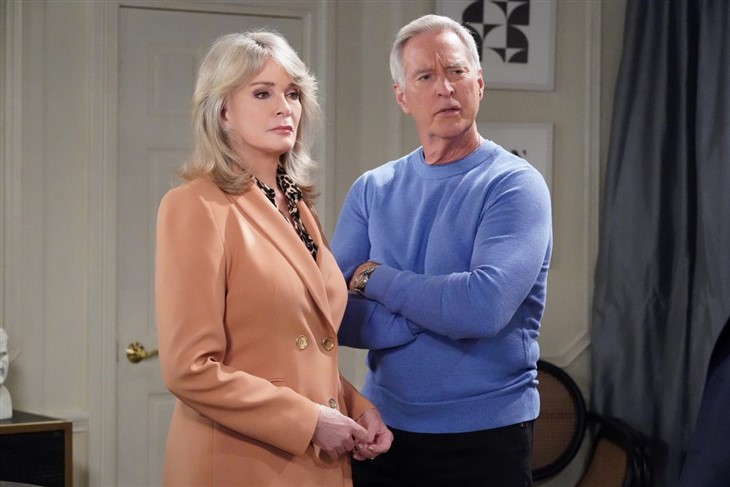 Days of Our Lives spoilers for the week of March 14 reveal that John Black (Drake Hogestyn) and Marlena Evans (Deidre Hall) prepare for another exorcism. Even though Susan Banks (Stacy Haiduk) insists that Belle Brady (Martha Madison) is possessed, too many people are realizing the truth. Will Johnny DiMera (Carson Boatman) finally be saved from the devil?

DOOL spoilers reveal that Belle is focused on trying to get EJ DiMera (Dan Feuerriegel) out of prison. Belle promised EJ that she hasn’t given up. Right now, Belle is questioning whether Chad DiMera (Billy Flynn) told the truth at EJ’s trial. Even if Chad admits to it, Belle will still have to prove he committed perjury.

In addition to that complication, that won’t necessarily free EJ as everyone thinks he’s guilty. Not to mention that DA Melinda Trask (Tina Huang) has no intention of letting EJ go free. Trask wanted EJ’s head on a platter and now she has it. So, it will take solid proof for EJ to be released from prison.

While Belle is focused on EJ, she will be thwarted by someone unexpected. The devil needs to get Susan off his tracks. Lucifer makes the psychic believe that Belle is the one who is possessed instead of Johnny. As a result, Susan becomes determined to prove it.

It is teased that during the week of March 14, John and Marlena will prepare for another exorcism. Now, John and Eric Brady (Greg Vaughan) performed an exorcism on “MarDevil.” However, Marlena never helped perform an exorcism.

So, this wording suggests that there are at least two exorcisms that week. One could be a failed exorcism on Belle, who isn’t being controlled by the devil.

Days of Our Lives spoilers reveal that Ben Weston (Robert Scott Wilson) could finally share his suspicions with John and/or Marlena. Ben and Ciara Brady Weston (Victoria Konefal) are the ones who went to Susan about “JoDevil.” So, when they find out about Belle’s failed exorcism, one or both of them could inform “Jarlena” of the truth.

Ben’s information could lead John and Marlena to realize the horrifying truth. John and Marlena will do everything they can to save Johnny. However, they won’t have to do it alone. Eric is back in Salem and could help perform yet another exorcism. Will they finally get rid of the devil for good, though? Share your thoughts and remember to keep watching the NBC soap to see what happens next.