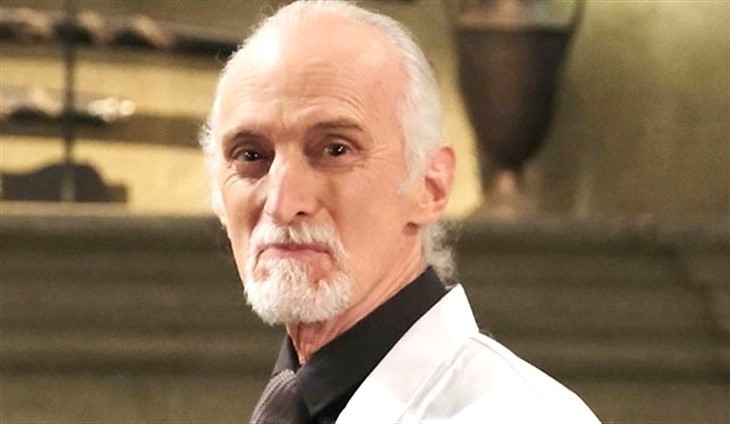 Days of Our Lives spoilers reveal Dr. Rolf pulling off one of his greatest feats yet when he soon brings Stefan O. DiMera back to life. The thing is, Rolf looks somewhat different now that he has been pardoned and is out of prison back to his old tricks.

Days Of Our Lives Spoilers – A Brand-New Dr. Rolf

Will Utay is the actor who had been bringing Dr. Wilhelm Rolf to life since the 1990s, reprising the part a few years ago when more and more Salemites started returning to life. We learned that Rolf and Kristen DiMera (Stacy Haiduk) were behind that as Rolf pulled off even more feats.

He managed to also insert the essence of Princess Gina into Hope Brady (Kristian Alfonso) and the essence of Stefano DiMera (Joseph Mascolo) into Steve Johnson (Stephen Nichols). He even managed to perform a procedure that allowed Kristen to become pregnant at an advanced maternal age. Then, he went to jail for a while and was finally released with a bunch of other Salem bad guys but now he is played by Richard Wharton.

Word is, Will Utay chose not to return to his recurring role of Dr. Rolf this time around, but since Rolf was crucial for the story, DOOL chose to recast with Wharton. Amazingly, the recast seems to be seamless as Wharton bears an uncanny resemblance to Utay and has the mad scientist accent down pat.

When Wharton first arrived on the set to start playing Rolf, one particular actor who has been around since the 80s was the one to give him the lowdown on his character — Drake Hogestyn (John Black).

“When I met Drake, he was telling me all these things, interaction that Rolf had with him,” Wharton said in the August 16, 2022, issue of Soap Opera Digest. “He’s like the encyclopedia of Days of Our Lives. So, that’s where I am learning a lot of it, from the other actors.”

Wharton also revealed that he had to have the accent down in order to get the job. “That was part of the audition requirement,” he said. “And it’s something I keep working on. Russian is [an accent] I have done a lot, so keeping that separate from the German has been a bit of a challenge.”

So far, Wharton fits right in as Rolf and we can’t wait to see what sorcery he comes up with next. Stay tuned to Days of Our Lives weekdays to see how this story plays out.