Days Of Our Lives Spoilers: The Morning After For Allie And Chanel 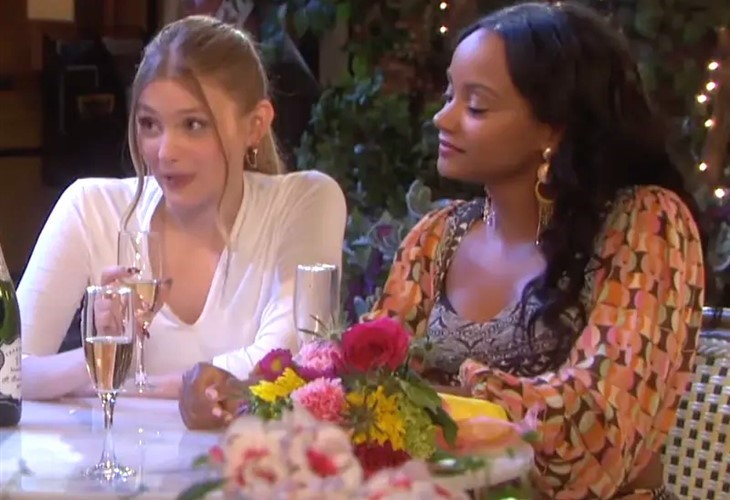 Days of Our Lives (DOOL) spoilers for Wednesday, January 12, 2022, reveal a stunned Allie deciding that lying is the best course of action.

Days Of Our Lives Spoilers – A Night They Will Never Forget?

All Allie Horton (Lindsay Arnold) wanted was to be a friend to Chanel Dupree (Raven Bowens) after JoDevil (Carson Boatman) dumped her, but then Chanel wanted more and Allie backed away. Then, she decided she would just spend the night as friends. However, one thing led to another and they are definitely not friends anymore, but what is Allie to do since she convinced herself she is in love with Tripp Johnson (Lucas Adams)?

Well, like, of course. She tells Tripp nothing happened between her and Chanel. She was just there to be a good friend to someone who was heartbroken. Too bad neither Allie nor Chanel know that Paulina Price (Jackee Harry) is aware of exactly what went on, but she quietly closed the door when she walked in on them.

Nobody seems to think that Johnny DiMera’s choice of clothing and brand-new personality is strange, but EJ DiMera (Daniel Fuerreigel) is quite shocked when Johnny comes to him with an offer. EJ is surprised enough that his son told Susan Banks (Stacy Haiduk) to get out of town. Why would he do that to his own grandmother?

And why is Johnny coming to him with a strange offer? Does this have anything to do with EJ’s legal case? Does JoDevil think he can solve things because perhaps Satan caused this whole mess with Lucas and Sami (Alison Sweeney) to begin with?

Since justice moves swiftly in Salem, it’s almost time for EJ’s trial — and right after the holidays too. Chad DiMera (Billy Flynn) knows exactly what Lucas Horton (Bryan R. Dattilo) did on Kate Roberts’ (Lauren Koslow) computer, but he tells Kate he wants to take the stand in his brother’s trial and tell the truth as he knows it. Does that mean he plans to tell a lie? After all, he wants to hold onto his CEO position, and putting EJ behind bars will help his cause? Stay tuned to Days of Our Lives weekdays to see how these stories play out.

General Hospital (GH) Spoilers Wednesday, January 12: Is It Really Over For Carly And Sonny?