Days Of Our Lives Spoilers: The Deverauxs Demand The Truth From Gwen 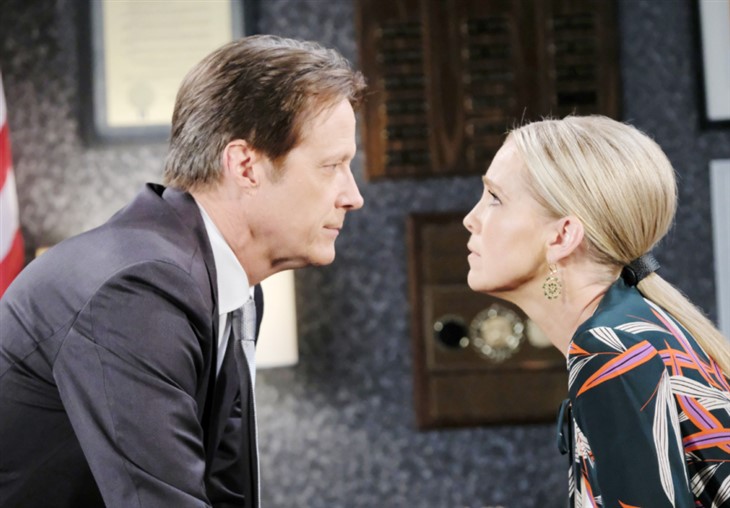 Days of Our Lives spoilers and updates tease that the Deverauxs will demand the truth in an upcoming episode of DOOL!

One truth that Jack and Jennifer Deveraux (Matthew Ashford, Melissa Reeves) will demand from Gwen Rizchech (Emily O’Brien) is if she really killed Laura Horton (Jaime Lyn Bauer)! Given that Abigail DiMera (Marci Miller) had just broken up her relationship with Xander Cook (Paul Telfer) and ruined her wedding, she could have said that to her for spite! Gwen was also in the process of being arrested at the time and put in cuffs by Rafe Hernandez (Galen Gering)!

The sudden death of Laura has been very difficult for the Horton family, especially for Jennifer, who spent months away from Salem settling her mother’s estate. Abigail, Jack and Jennifer all want to know and demand from Gwen whether she really killed Laura or not!

DOOL Spoilers – Was The Lie About Laura Horton’s Death Just The Beginning?

What else is there in Gwen’s repertoire of lies that the Deveraux family will want her to clear up? Previous episodes of Days of Our Lives revealed Gwen has been a busy little beaver in all things shady, although some were under blackmail!  When Gwen first came to Salem, she had been running from Philadelphia and Jake DiMera (Brandon Barash), having in her possession a mob boss’s book! She had “borrowed” the book but never returned it, but he finally got it back and rid himself of the threat from the owner of said book! Perhaps Gwen knows Ava Vitali (Tamara Braun) better than she’s admitted – Gwen, Jake and Ava were there at the same time and Jake worked for Ava’s cousin!

Days Of Our Lives Spoilers – The Truth, The Whole Truth And Nothing But The Truth

Abigail will warn Gwen if she doesn’t tell the whole truth about herself and what she has done since in Salem, she’ll dig it out! She also wants to know about that miscarriage of Chad DiMera’s (Billy Flynn) baby from her one night stand with him. Viewers will remember that Gwen was blackmailed into being a drug mule by a dirty doctor Clay Snyder (Michael Lowry).

Snyder had quite a racket going selling drugs he was pilfering from the pharmacy of Salem University Hospital. He later came to an ignominious end floating in the lake after Xander had scared him into a heart attack!

Gwen has nothing left to lose – and Jack, Jennifer and Abigail tell her she must confess everything she has lied about or covered up. She’s lost Xander, she’s lost Jack, and she’s lost everyone who she thought cared about her, but there may be some hope for her if she turns over on Ava! After all, Ava threw her under the bus so why shouldn’t she throw her back under the bus too! The only friend she has left in Salem just got the shaft too, and Leo Stark (Greg Rikaart) isn’t just crawling under a rock. Gwen considers the warnings of the Deverauxs and Abigail in particular, and she starts to plot revenge herself!