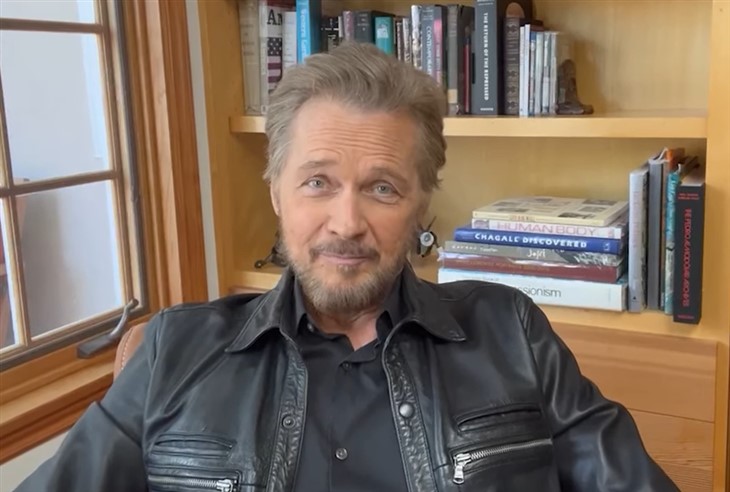 Days of Our Lives spoilers indicate that Stephen Nichols (Steve Johnson) seems to be teasing the return of one of his tv sons after a short exit. Which Johnson son could be returning to the fold? Could this be a permanent arrangement?

Days Of Our Lives Spoilers – Lucas Adams Exits The Show

Days Of Our Lives spoilers reveal that Lucas Adams was exiting the show. However, the writers threw in a bit of a twist. Lucas exited for all of five minutes before he returned. After Bo Brady (Peter Reckell) arrived from Heaven to resurrect Tripp, he quickly decided he was leaving Salem and moved to Seattle.

Before long, Steve and Kayla Johnson (Mary Beth Evans) arrived in Seattle to visit all three children. Another very short exit for Adams. Now Nichols is tweeting about his onscreen son once again. Is Tripp about to come home or should we expect another exit? Tripp has followed in Kayla’s footsteps, will he come back to Salem instead of practicing elsewhere?

Stephen loves to tease fans and his co-workers. In the Instagram video, Stephen asks Lucas why he has to be more handsome than his poppa. Lucas counters that Stephan “ages like fine wine.” These two obviously love working together but does this mean more Tripp scenes are coming?

Stephen wrote the following about his onscreen son, “I’m so lucky this young man is my TV son. He’s talented, hardworking, and kind … like my real-life son. Couldn’t be better. It’s always a joy with you, Lucas Adams.”

Days Of Our Lives Spoilers – What Does Stephan Nichols Post Mean?

Stephen often posts clips shortly before they air. Of course, with everything going on with Kayla and Marlena Evans (Deidre Hall) right now, Tripp’s appearance would make sense. Will Steve go to Seattle to check on his sons? Will the boys come to Salem to help search for Kayla?

Steve has been very concerned about all of his children. This concern is likely to increase now that Orpheus (George DelHoyo) has Kayla and Marlena. Is Steve trying to bring the children back into the fold, or keep them as far away as possible? Will Steve’s whole family survive?

Steve and John will have to bring Orpheus down and save their wives. However, it is very unlikely that the Johnson brothers will stay away while this is going on. Tripp returning would make perfect sense. Will Tripp come home to help save Kayla? Will Steve simply make a trip out West to check on his sons? Keep checking back for updates.