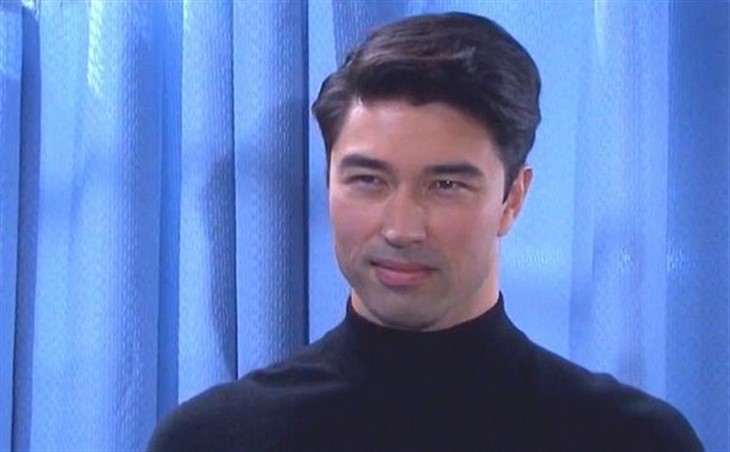 Days of Our Lives spoilers reveal that Li Shin (Remington Hoffman) is taking extreme action to keep Gabi Hernandez (Camila Banus). Even though Stefan DiMera (Brandon Barash) was brought back to the lab before Gabi saw him, Li could face a new complication. That complication could be Li’s father, Mr. Wei Shin (Clyde Kusatsu).

DOOL spoilers reveal that fans haven’t seen Mr. Shin in quite a long time. Even though Li claimed that his father was busy dealing with business, fans wondered if it was true. There was even speculation that Li could have killed his own father. After all, look at everything else Li has been doing lately.

However, Mr. Shin will arrive in Salem during the week of August 29. This time, the part will be played by actor Clyde Kusatsu.

While Mr. Shin has been gone, Li has been spending his time in Salem. Li and Gabi ended up having a night of passion. While Gabi thought it was a one-time fling, Li was interested in having a relationship with her. Gabi gave in and has been staying with Li in his hotel room.

While Li and Gabi do have a romance, the way they feel is completely different. Li seems almost obsessive and controlling. Li even demanded that Gabi stop wearing Stefan’s wedding ring, a request that was denied.

As for Gabi, she is still in love with Stefan. Despite the man being “dead” for a few years, that is a love that Gabi can’t move past.

Days of Our Lives spoilers reveal that Li found out that Jake DiMera’s (formerly played by Brandon Barash) heart was put into Stefan’s body. Li was willing to pull the plug on Stefan in order to keep Gabi for himself.

Stefan is still alive and actually woke up. Li ordered Dr. Wilhelm Rolf (Richard Wharton) to make Stefan think he was in love with Chloe Lane (Nadia Bjorlin). While Stefan escaped during the first brainwashing attempt, he was caught before Gabi saw him. So, Gabi still has no clue that Stefan is alive.

With Mr. Shin returning to Salem at the peak of Li’s scheme, what does that mean for Gabi? It’s possible that Mr. Shin will find out what his son has been up to. Li could complicate everything for Li.

However, what drastic action will Li take to accomplish his goals? Would he attempt to harm his own father? Share your thoughts and remember to keep watching the NBC soap to see what happens next.