Days Of Our Lives Spoilers: Sarah And Xander Go Undercover To Bring Down Gwen 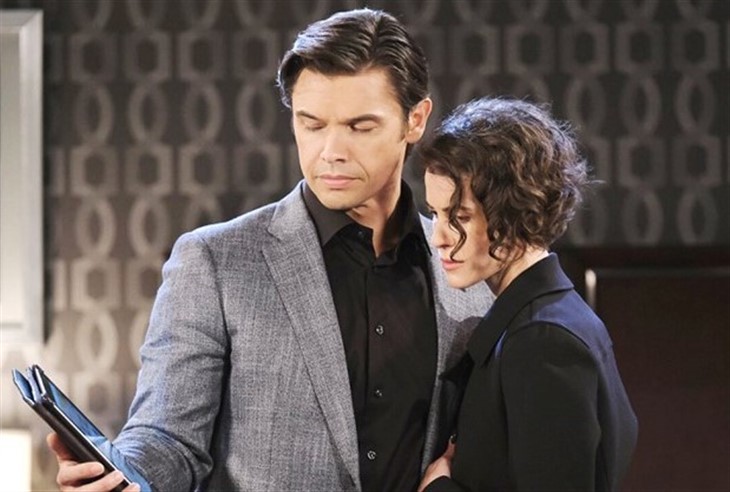 Days of Our Lives (DOOL) spoilers for Wednesday, August 10, 2022, reveal Xander and Sarah determined to get to the bottom of what Gwen really did the night Abigail died.

Days Of Our Lives Spoilers – Never Date Your Babysitter

Sarah Horton (Linsey Godfrey) now knows she didn’t end up with Abigail DiMera (Marci Miller) the night that Abby died but someone who looked just like her did, so it had to be the result of a mask. They followed Gwen Rizcech (Emily O’Brien) to a dumpster and saw her toss a mask but then were unable to find it because Leo Stark (Greg Rikaart) got to it first.

Now, Xander Cook (Paul Telfer) and Sarah feel they need to prove that Gwen somehow snuck out of a high-security prison that night, since being in prison is her only alibi and should be a rock-solid one, but apparently anyone can break out of Statesville and return.

To that end, Xander dresses as a priest to visit the prison warden and get a look at some records to see if Gwen really did fall asleep in the library as she claims. Will they get the information they are looking for?

Now that Ava Vitali (Tamara Braun) has managed to worm her way into a new home at the DiMera mansion, she has to get used to how things are done around there, as well as all of the people there. She also happens to come across Johnny DiMera (Carson Boatman) and is quite intrigued by the younger man. Things get even more intriguing and awkward when they find themselves in a compromising position.

Alex Kiriakis (Robert Scott Wilson) is new to Salem and doesn’t know everyone yet, but when he meets Chanel Dupree (Raven Bowens), he would like to get to know her. Isn’t she a popular young woman? However, she is also spoken for so how will Chanel react to Alex’s moves?

Alex’s brother Sonny Kiriakis (Zach Tinker) still wants to be the best friend he can be to Chad DiMera (Billy Flynn) right now, but things don’t go quite as planned. What happens to ruin Sonny’s intentions to perform a good deed? Stay tuned to Days of Our Lives weekdays to see how these stories play out.

Y&R Spoilers: Nikki Tries To Save Her Family