Days Of Our Lives Spoilers: Sami’s Finds Belle And EJ Together 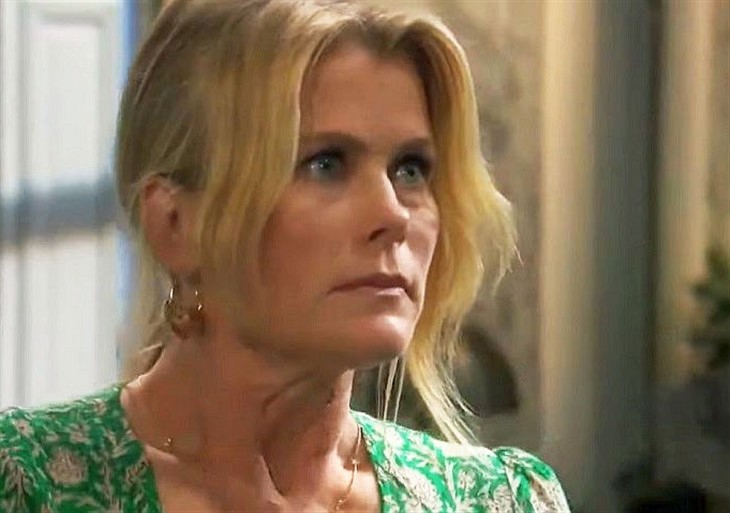 Days of Our Lives (DOOL) spoilers for Monday, June 27, 2022, reveal Sami seeing something that should shock her, but she also seems to ignore it.

Days Of Our Lives Spoilers – What Will Sami Brady Learn?

Sami (Alison Sweeney) just wants to marry Lucas Horton (Bryan R. Dattilo) again, a man who had her kidnapped. It’s best if Lucas confesses. (While it’s best if he confesses, that doesn’t look like it will happen anytime soon.) Of course, she does not know that so she feels she needs to take care of a legality first. She is still married to EJ DiMera (Daniel Feuerriegel) and needs a divorce.

So, she waltzes into the DiMera mansion just as Belle Black Brady (Martha Madison) and EJ are getting quite cozy. While she sees them, she is more interested in presenting her husband with divorce papers. When Sami has a one-track mind, there is little that can distract her.

Belle makes herself scarce when she sees her sister as EJ has to deal with his wife and face the fact that his marriage is more than over.

Chad DiMera (Billy Flynn) still can’t believe his beloved Abigail DiMera (Marci Miller) is gone. They were so happy as they planned to have a third child, but now he has to deal with the children he already has. John Black (Drake Hogestyn) and Marlena Evans (Deidre Hall) have been great about taking care of Charlotte and Thomas, but now he needs to be with them.

However, John and Marlena are both very worried about Chad and lend his support to him but is there anything they can really do?

Days Of Our Lives Spoilers – Is Nicole Walker Ready To Call It Off?

For some reason, Nicole Walker (Arianne Zucker) insists on going on with this charade that she is in love with Rafe Hernandez (Galen Gering) and wants to marry him. She keeps putting on a smile and telling herself this is the right thing despite how she feels for Eric Brady (Greg Vaughan). He’s the love of her life and she is still trying to accept that it’s over.

And Rafe is trying to tell himself that Nicole really wants to marry him, but he has his doubts and she questions her. Will Nicole have to admit the truth? Stay tuned to Days of Our Lives weekdays to see how these stories play out.