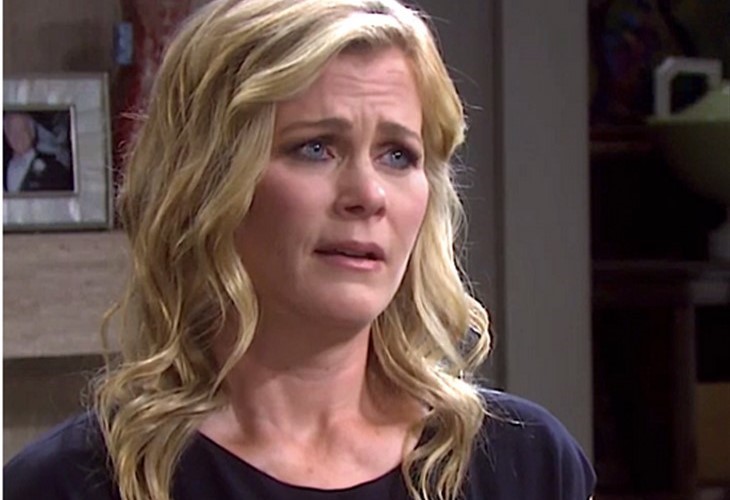 Days of Our Lives (DOOL) spoilers reveal that Ava Vitali (Tamara Braun) is fuming over Rafe Hernandez (Galen Gering) and Nicole Walker’s (Arianne Zucker) night of passion. Ava’s solution is to behead Duke the Bear, the stuffed teddy that “Racole” share custody of. However, Ava isn’t suspected of the crime. Instead, Sami DiMera (Alison Sweeney) is blamed for the beheading.

DOOL spoilers reveal that on Halloween, Marlena Evans aka “MarDevil” (Deidre Hall) raised the dead. Rafe rushed to save Nicole from an undead Deimos Kiriakis (Vincent Irizarry), but the body disappeared by the time he arrived. While Ava was being interrogated at the police station for a murder she didn’t commit, Rafe was supposed to be working. Instead, Rafe and Nicole engaged in passion on the conference table at Basic Black.

Ava overheard this shocking piece of information. In an absolute rage, Ava got to work to punish Rafe and Nicole. Ava won’t admit to knowing about Rafe and Nicole’s secret. Instead, she toys with “Racole” and one way she does that is by beheading their beloved bear.

Nicole will make a disturbing discovery, which is finding Duke with his head cut off. Ava left the bear’s remains on Nicole’s desk. Nicole will be so upset by this that she immediately sends an SOS message to Rafe. Of course, Rafe rushes off to save Nicole and to investigate this so-called crime.

Days of Our Lives spoilers reveal that Rafe will look into the incident even though there are real crimes to be investigated in Salem. However, the bear is a priority, at least to Rafe and Nicole. Ava doesn’t want to get caught as Rafe and Nicole don’t know that their secret is out. Ava wants to play mind games to maximize their suffering. So, she apparently lies to Rafe and claims to have seen a mysterious blonde at Basic Black around the time of the “murder.”

Rafe will consider looking at the security footage, but Ava will talk him out of it. If he checks the CCTV, then he will know there is no mysterious blonde. Not only that, but Ava might be on camera beheading poor, defenseless Duke.

Ava will use Nicole and Sami’s war to point the finger. Of course, Nicole and Sami just got into it once again, but this time it was over EJ DiMera (Dan Feuerriegel). So, Nicole will accept Ava’s suggestion that Sami is responsible. Sami will be blamed and Ava will act like the caring and compassionate friend who consoles Nicole during this senseless decapitation.

As Rafe continues to go on and on about the bear, Ava will lose her temper. Ava will tell Rafe that it’s ridiculous to go into a full investigation into the beheading of a stuffed animal. However, as Ava continues toying with Rafe and Nicole, she could go too far. By the time Rafe catches on, though, it might be too late.

GH Spoilers: Laura Shuts Out Kevin In The Wake Of Tragedy!