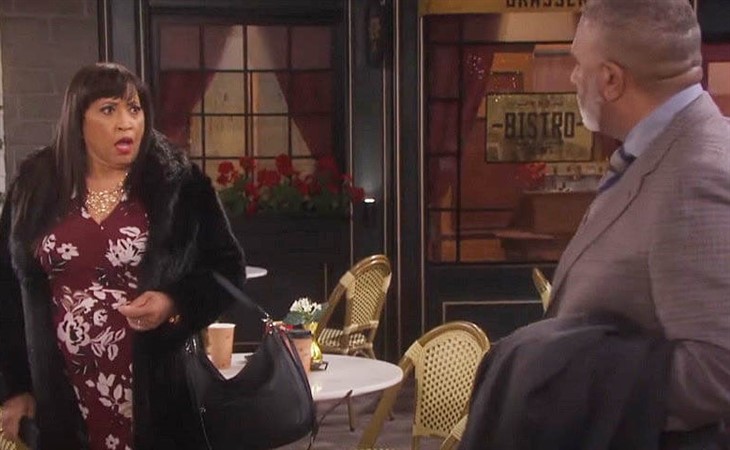 Days of Our Lives spoilers reveal that Paulina Price (Jackee Harry) was frantic when TR Coates (William Christian) showed up in Salem. Despite their history, TR is succeeding at convincing Paulina that he’s changed. With Paulina still heartbroken over losing Abe Carver (James Reynolds), she could make a huge mistake. Paulina might give TR another chance.

Days Of Our Lives Spoilers – Heartbroken Over Abe Carver

DOOL spoilers reveal that Abe and Paulina were all set to get married. However, on the day of the wedding, Marlena Evans aka “MarDevil” (Deidre Hall) made sure Chanel Dupree (Raven Bowens) exposed the secret about Lani Price-Grant’s (Sal Stowers) parentage.

Even though Abe has since forgiven Paulina, he doesn’t completely trust her. So, despite Abe’s feelings for Paulina, he can’t bring himself to get romantically involved with her again. Paulina is still heartbroken, and her loneliness could lead her to make a bad decision.

When TR first came into Salem, Paulina panicked and did everything she could to protect Lani and the twins. TR keeps saying that he went to prison and got sober. The movie producer also claims that he hasn’t hit a woman since giving up the drugs and alcohol. Of course, fans know that TR is still abusive and is still on drugs.

Days Of Our Lives Spoilers – Getting Into Paulina Price’s Head

Days of Our Lives spoilers reveal that TR was successfully getting into Paulina’s head. When Paulina returned the flowers from TR and smashed the glass vase on the floor, the movie producer played mind games. TR seemed to know exactly what to say to make Paulina think about how she asked for a second chance from Lani.

It is suggested that TR will continue playing mind games with Paulina. Due to Paulina’s heartbreak as well as the devastation over Eli Grant’s (Lamon Archey) condition, she could make a mistake.

Even though TR is the person who shot Eli, he took steps to implicate his drug dealer. Then, he convinced Beth Howard (Donielle Artese) to stay quiet by giving her a role in Johnny DiMera’s (Carson Boatman) possession movie. In storylines like this, the truth probably won’t come out for at least a few months.

TR will continue working on getting Paulina to give him another chance. There are clues that Paulina will give in, but could it be the last mistake she ever makes? What happens when Paulina finds out that it was TR that shot Eli? Could the abuser resort to murder to keep Lani from finding out the truth?

Brian Laundrie Fled To Save His Mother From Arrest

GH Spoilers: Kevin Finds Out The Truth About Esme’s Bio Dad—It’s Him?!