Days Of Our Lives Spoilers: Gabi Tangles With EJ Over Ava 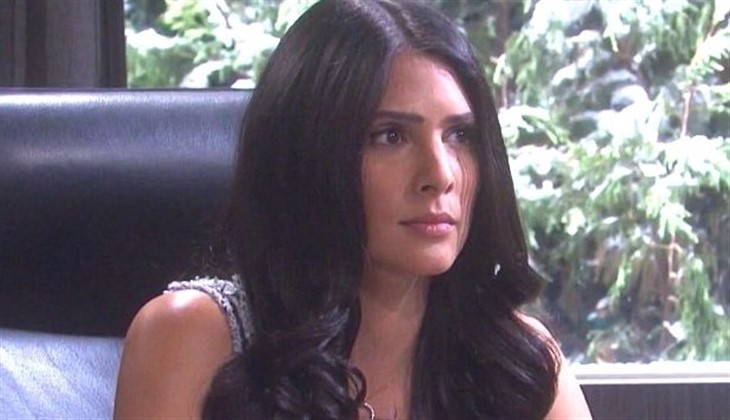 Days of Our Lives spoilers and updates tease that Gabi Hernandez (Camila Banus) will tangle with EJ DiMera (Dan Feurreriegel) over Ava Vitali (Tamara Braun). Gabi helped Ava fake her marriage to Jake DiMera (Brandon Barash) and therefore her widowhood, so she could inherit his DiMera shares.

Days Of Our Lives Spoilers – EJ DiMera Knew It

EJ really raised a ruckus at the special DiMera board meeting where he appealed to Wei Shin (Clyde Kusatsu) to stop Ava from being able to vote due to mental disorder. Gabi took exception to it and even Li Shin (Remington Hoffman) didn’t like it and Johnny DiMera (Carson Boatman) took up for Ava. Li knew darn well that Ava hadn’t hallucinated Jake alive, she’d merely mistaken an escaped twin Stefan DiMera (Brandon Barash) for him.

Li would prefer that Gabi didn’t know her dead husband had been resurrected just yet, because he doesn’t want to lose her to him. And Gabi has become somewhat suspicious of Li of late, because she’s almost caught him a couple of times in regards to Stefan talking to Dr. Wilhelm Rolf (Richard Wharton).

EJ suspects the marriage of Ava to Jake was faked and suspects Gabi is in on it; by helping Ava keep DiMera shares as Jake’s widow she kept her position also. It was EJ’s intention to oust both Gabi and Ava and take the reins of DiMera sole CEO himself. He’d already ousted younger brother Chad DiMera (Billy Flynn) which is one more reason he and his children moved out of the mansion, aside from grief over his slain wife. Gabi also supports Ava and understands when grief over a recently deceased soulmate makes one see their loved one from beyond, the same thing happened with her over Stefan. EJ hopes to prove that Gabi is complicit in falsifying legal documents for Ava’s marriage to Jake, therefore making both guilty of fraud.

Days Of Our Lives Spoilers – A Confrontation Ensues

A confrontation ensues between EJ and Gabi, and it gets pretty loud and even borderline violent, even though so far it’s only a he said-she said. Just like EJ is now trying to invalidate Ava’s right to Jake’s shares, the same thing had happened to Gabi when Stefan died. At the time, Gabi and Kate Roberts, (Lauren Koslow) as Andre DiMera’s (Thaao Penghlis) widow vied for the position of DiMera CEO after Stefan’s death.

Gabi won out until Tony DiMera (Thaao Penghlis) returned “from the dead” along with Kristen DiMera (Stacy Haiduk) and Tony and Chad took it for a while. But she maintained her position even when EJ came back, and she doesn’t intend to lose it – and she has to keep Ava in good standing to do so.

GH Spoilers: Cody’s Proposition For Selina, Is He Investigating Britt?

Y&R Spoilers: Nikki Needs Deacon’s Help, Will They Fall Into Bed Instead?