Days Of Our Lives Spoilers: Gabi Hears Something She Definitely Should — Or Shouldn’t 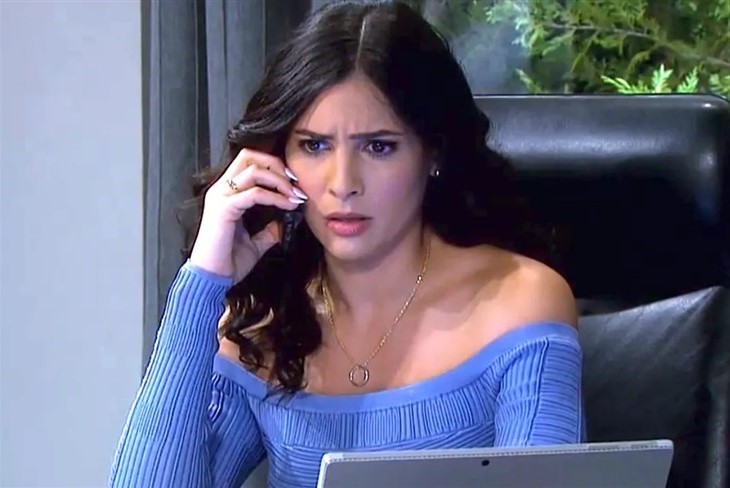 Days of Our Lives (DOOL) spoilers for Tuesday, August 30, 2022, reveal Kristen conspiring but not being careful

Days Of Our Lives Spoilers – Gabi Hernandez’s Suspicions Are Piqued

Kristen DiMera (Stacy Haiduk) can’t imagine that anyone would learn what she’s been up to with Dr. Wilhelm Rolf (Richard Wharton) of late. After all, she is keeping it all on the down low, right? She wants Stefan O. DiMera (Brandon Barash) back amongst the living, but she also needs him to be brainwashed into thinking he still has feelings for Chloe Lane (Nadia Bjorlin). After all, that would help her win back Brady Black (Eric Martsolf), at least in her mind.

What Kristen does not expect is for Gabi Hernandez (Camila Banus) to hear her and Rolf talking and wonder what’s going on. If we know Gabi, she won’t rest until she figures out what Kristen is up to, meaning Kristen might need Li Shin’s (Remington Hoffman) help and fast. After all, he wants Gabi for himself so he and Kristen have a mutual interest in who Stefan wants when he finally wakes for the second time.

And speaking of Chloe, she gets to hear everything that Brady knows she has been up to of late as Brady gives his girlfriend an update. Too bad neither one of them know what is really going on or it would blow their minds.

EJ DiMera (Daniel Feuerriegel) is determined to not let Ava Vitali (Tamara Braun) have a piece of DiMera Enterprises even if she is Jake DiMera’s widow. Knowing that Ava might have hallucinated seeing Jake (when it was really Stefan and not a hallucination at all), EJ thinks he has the upper hand and can just have her declared mentally unfit.

However, for now, EJ is allowing both Johnny DiMera (Carson Boatman) and Ava to believe he is on Ava’s side all the way. That’s why she is about to be blindsided at the next DiMera Enterprises board meeting. Ava will find she has a few allies, but will these allies be enough to save her from EJ’s ruthlessness and plot?

EJ might actually find a few board members doing their best to rescue Ava from his machinations. Stay tuned to Days of Our Lives weekdays to see how these stories play out.

Y&R Spoilers: Victor Is About To Go To War With Adam — Again