Days Of Our Lives Spoilers: Early Labor Complications, Shawn And Jan Get Closer 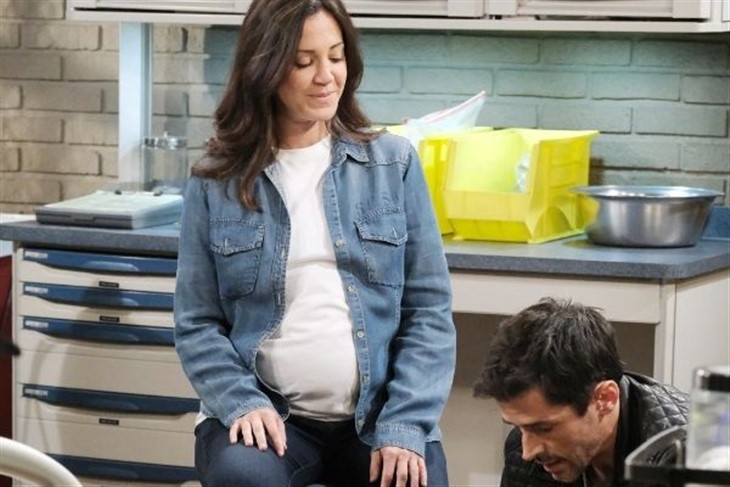 Days of Our Lives spoilers reveal that Jan Spears (Heather Lindell) ends up in the hospital again. This time, it doesn’t appear to be a fake pregnancy pain, but the baby could really be in trouble. When Jan is admitted to the hospital, Shawn Brady (Brandon Beemer) holds her hand. So, it seems that this new baby crisis will get Shawn sucked deeper into Jan’s web.

DOOL spoilers reveal that Jan used the high-risk pregnancy to get on house arrest. It also convinced Shawn to let Jan stay with him until the baby is born. After Jan’s fight with Belle Brady (Martha Madison), fake stomach pains were used to gain Shawn’s sympathy.

During the week of June 6, Jan will have her first therapy session with Marlena Evans (Deidre Hall). It comes to an abrupt halt when Jan lashes out at Marlena. However, it appears that this isn’t another fake stomach pain. It is teased that Jan will face a real medical crisis with the unborn child.

In a sneak peek photo published in Soap Opera Digest, Jan is lying in a hospital bed. Jan is wearing a hospital gown, so it appears that she is admitted. Shawn is sitting in a chair next to Jan’s hospital bed. Shawn is holding Jan’s hand as her face is twisted in pain and worry.

The first time Jan got checked out at the hospital, she claimed to be worried about the baby. However, Shawn knew that it was just another manipulative move, and the baby was fine. Something is different this time, though. Perhaps Kayla Johnson (Mary Beth Evans) finds something troubling. That would explain why Shawn and Jan are both concerned.

Days Of Our Lives Spoilers – Shawn Brady Sucked into Web

Days of Our Lives spoilers reveal that Jan initially used this baby to get closer to Shawn. Longtime fans remember when Jan was pregnant years ago and Shawn stepped in to be a father figure for the child. Of course, that baby ended up not coming to be.

Even though Jan is a sociopath and probably is incapable of change, head writer Ron Carlivati is known to love tough redemption stories. So, Carlivati might be trying to use the baby as a way for Jan to change her ways. It is teased that Shawn and Jan will come closer together during the baby crisis. So, it seems that Shawn is getting sucked in deeper.

It is unlikely that fans will buy Jan’s redemption though. Just look what happened when writers failed to convince viewers of Kristen DiMera’s (Stacy Haiduk) redemption!

DOOL Spoilers – What About Belle Brady?

Fans have often thought of Shawn and Belle as endgame. It’s hard to see how Belle could get back together with Shawn with Jan’s baby a constant reminder of the betrayal. So, if Jan does go into premature labor, there is a good chance the child won’t survive. It will also cause Jan to go into a rage, throwing any potential redemption attempts out the window.

Although soap fans like to be surprised and for writing not to be predictable, Jan’s redemption is not something viewers want to see. So, how will Shawn and Belle end up back together? Will Jan’s baby have to die to fix the devil’s mess?