Days Of Our Lives Spoilers: Could Lucas Have Murdered Abigail? 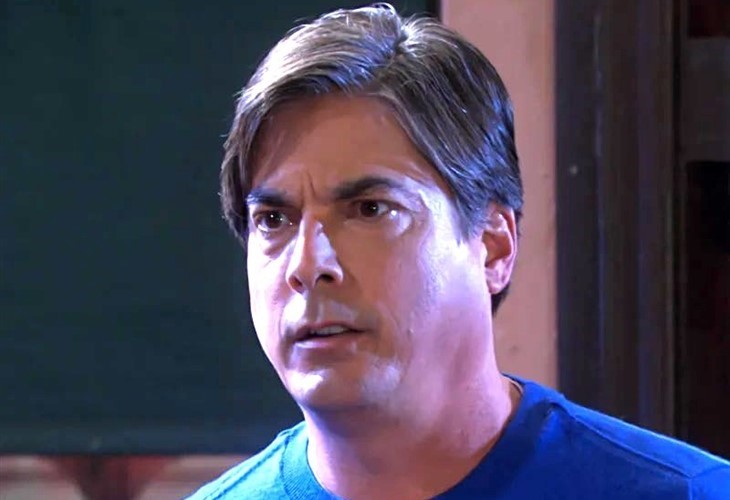 Days Of Our Lives spoilers and updates tease that there’s a possibility Lucas Horton (Bryan Datillo) could be Abigail DiMera’s (Marci Miller) murderer! Upcoming DOOL episodes will show he got drunk as a skunk and won’t remember what he did; although he’ll be one of many suspects!

Longtime viewers will remember Lucas is an alcoholic but he hasn’t fallen off the wagon in a while, but for some reason he’ll go on a drunk! Perhaps guilt is building up in him for how he went about getting Sami Brady (Allison Sweeney) back, or maybe someone drugged his beverage trying to set him up! Either way he won’t remember what he did the next morning, and he’ll have one horrific hangover to boot, and a headache that’ll pretty much put him out of commission!

Lucas will have memory gaps and maybe even some bumps and bruises – he might even find the headache is from a blow to his head! He’ll know he must have gotten into one hell-o of a fight, but he won’t remember with whom or over what, although he might suspect someone!

DOOL Spoilers – Lucas Horton Feels The Walls Closing In On Him

Lucas will feel the walls closing in on him after he attacks EJ DiMera (Dan Feurriegel) in the Horton Town Square, but what exactly prompts him? It could be Abigail’s latest investigative reporting job, which will make him fear his secrets will come out; perhaps he saw EJ talking about his being framed for kidnapping Sami. Lucas had framed EJ for kidnapping Sami when he actually did the kidnapping himself, to make himself her hero for rescuing her; which had been a pretty harebrained scheme! Abigail’s assignment will be something that Chad DiMera (Billy Flynn) will be alarmed over her taking – and obviously he will fear harm could come from it.

When Abigail is found dead, presumably by Chad, Lucas may be one of many suspects, depending on if she is investigating Sami’s kidnapping and who the real kidnapper might be. Leo Stark (Greg Rikaart) will be suspect number one, because he’s been staying in the wine cellar in the DiMera mansion and Thomas DiMera (Cary Christopher) spots him there. The other main suspect would be Gwen Rizchech, (Emily O’Brien) although she’ll have an alibi – she’s in Statesville, although she will make an ominous phone call!

Something will happen to make Lucas nervous that someone will figure out he kidnapped Sami and tell her-which would likely put an end to their wedding plans!  Abigail will be found dead the same day that Lucas is afraid of losing control of the kidnapping narrative, so it makes sense for him to be a suspect.

Lucas is not the likely murderer, although he may be afraid he is because of his memory gaps from the night that she’s found dead. He wouldn’t want his cousin dead under normal circumstances, but if the reason he feels the walls are closing in are because of questions she was asking it makes sense. Of course, it makes just as much sense for EJ to frame him for Abigail’s murder if he cannot prove he framed him for Sami’s kidnapping! And when you bring Clyde Weston (James Read) into the equation because he tries to recruit Lucas to kill EJ, things really start getting interesting!

EastEnders Spoilers: Who Will Be Zack’s Surprise Ally Be?

Y&R Spoilers: Ashland And Lily Refuse To Weaponize Kids, Both Walk Away?