Days Of Our Lives Spoilers: Chloe Wants A Truce With Kristen 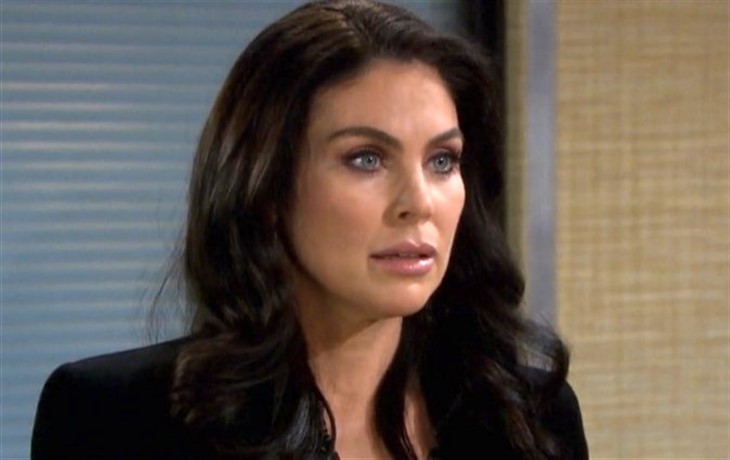 Days of Our Lives spoilers indicate that Chloe Lane (Nadia Bjorlin) will talk to Kristen Dimera (Stacy Haiduk) and even ask for a truce. Of course, Kristen will have no part of that because she holds all the cards. Will Kristen finally have Brady Black (Eric Martsolf) back in her arms.

Days Of Our Lives Spoilers – Kristen Dimera Holds All The Cards

Days Of Our Lives spoilers reveal that Kristen doesn’t need to entertain Chloe’s offer for a truce because she is holding all the cards. Kristen feels that Brady betrayed her by falling for another woman. However, Kristen went on the run, got herself arrested, and even broke out of prison and tried to kidnap their daughter. Brady had a right to move on.

However, Kristen feels that Brady wronged her and she will make him pay in any way possible. Marlena Evans (Deidre Hall) didn’t score any brownie points by turning on Kristen either. Kristen has the orchid that could save Marlena’s life but Brady will pay dearly to get it after how he and his family have treated Kristen over her daughter.

Kristen will no doubt force Brady to allow her to be around her daughter. Kristen may even force Brady to give her custody of their child since Chloe help Brady sway the judge in the custody hearing. However, Kristen will certainly want more. Kristen will insist on Brady breaking up with Chloe before she will allow him around their child. Kristen hates Chloe and wants her gone.

Other rumors suggest that Kristen may even force Brady to move in with her and live as a family with their daughter before she will hand over the orchid. After all, if Brady doesn’t comply, Kristen can make him sit by and watch Marlena and her friends, Kate Dimera (Lauren Koslow) and Kayla Johnson (Mary Beth Evans) die as well. Is that all Kristen will demand before giving Brady what he needs?

Dr. Rolf (Richard Wharton) is the one who gave the orchid to Kristen in the first place. Rolf may also offer Kristen a threat to hold over Brady’s head as well. Could Rolf have an even more potent toxin he could use on Marlena? Perhaps Rolf and Kristen will even threaten John Black (Drake Hogestyn) or even Chloe instead to keep Brady in line.

Whatever the threat, Brady will likely do exactly as he is told to protect his loved ones. Will Brady ever be free of Kristen again?

B&B Spoilers: The End Of The Road For ‘Bridge’

Days Of Our Lives Spoilers: Roman Makes A Deathbed Proposal