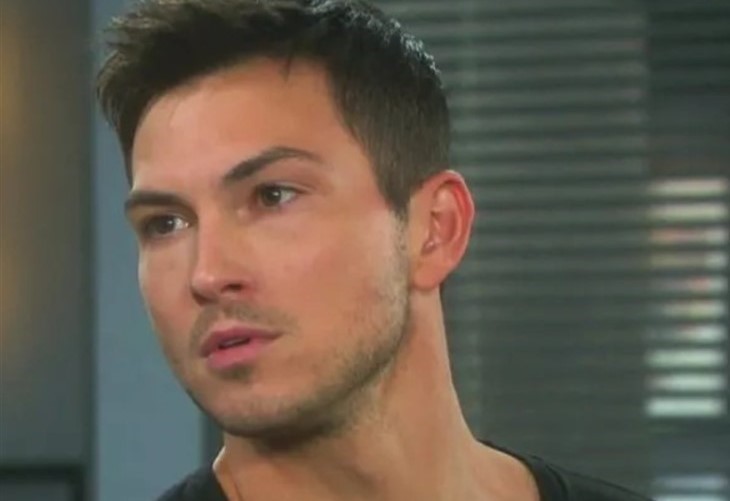 Days of Our Lives spoilers reveal that the devil needs to separate Ben Weston (Robert Scott Wilson) and Ciara Brady Weston (Victoria Konefal). Allie Horton aka “Allie-Devil” gets Ben to drink drugged tea. Once Ben is passed out, he is thrown into the DiMera crypt with Johnny DiMera (Carson Boatman). Then, the devil forges a note to explain Ben’s disappearance.

DOOL spoilers reveal that during the week of April 25, “Allie-Devil” decides that Ben and Ciara need to be separated. The devil is interested in the couple’s baby. So, Ben is no longer needed and will just get in the way. “Allie-Devil” tricks Ben into drinking tea that is drugged. Ben doesn’t pass out right away.

In the moments before he is knocked out, Ben sees a blurry Allie with glowing eyes. As the devil explains why Ben and Ciara’s baby is needed, the reformed serial killer tries to take action. However, the drug is too powerful. Eventually, Ben passes out.

After Ben is unconscious, “Allie-Devil” locks him up in the DiMera crypt. Eventually, Ben wakes up to find himself being held captive with Johnny. Of course, Johnny tells Ben what is going on.

Meanwhile, “Allie-Devil” doesn’t want Ciara or anyone else to become alarmed by Ben’s disappearance. To prevent Ciara from looking for Ben, “Allie-Devil” forges a note from the expectant father. When Ciara finds the note, she believes it’s from Ben. However, the devil gets annoyed when Ciara decides to go looking for Ben.

Days of Our Lives spoilers reveal that Ben and Johnny will get a visit from Andre DiMera (Thaao Penghlis). Andre torments Johnny by showing Chanel Dupree (Raven Bowen) making out with Tripp Johnson (Lucas Adams).

As for Ben, he is offered a devilish deal. Andre tells Ben that he can earn his freedom and reunite with Ciara. The condition is that Ben must commit murder. Ben isn’t supposed to just kill anyone, though. Ben is ordered to take Johnny’s life. The devil thinks it will be a simple decision for Ben. However, fans know that Ben will fight the urge to kill with every fiber of his being.

“Allie-Devil” realizes that separating Ben and Ciara is going to take more effort. So, the devil makes Evan Frears aka Christian Maddox (Brock Kelly) a deal. The devil tells Evan to convince Ciara that Ben is dead. Evan agrees to the plan, so the devil breaks the felon out of prison.

While Ben is locked up in the DiMera crypt, Ciara finds Ben’s slaughtered body. However, it’s not really Ben but a devilish trick. When Ciara sees who is standing over Ben’s corpse, she is horrified. This is probably the point when a possessed Allie “saves” Ciara. What Ciara doesn’t know is that she is in even more danger than ever, and so is her unborn baby.