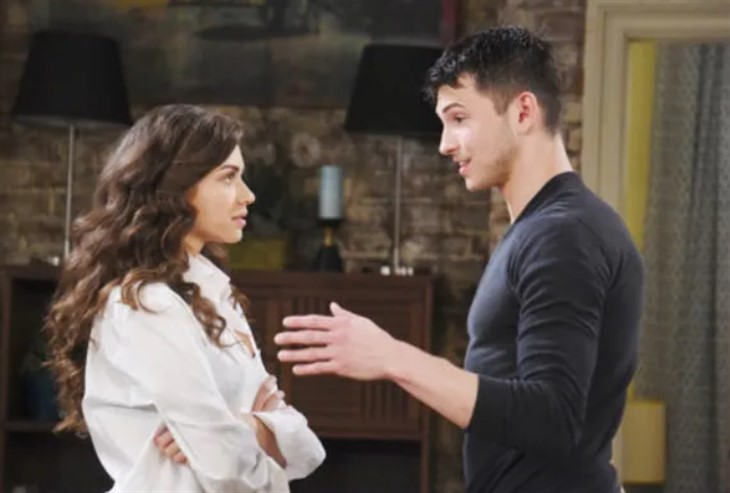 Days of Our Lives spoilers for the week of January 10 reveal that Ben Weston (Robert Scott Wilson) and Ciara Brady Weston (Victoria Konefal) will face another problem. It is teased that the couple will wrestle with a decision about their unborn baby. Is the child in medical trouble or is this about a more personal struggle, such as a baby name?

Days Of Our Lives Spoilers – ‘CIN’ Let Guard Down

DOOL spoilers reveal that Ben and Ciara just went through finding out that Marlena Evans (Deidre Hall) was possessed by the devil. Susan Banks (Stacy Haiduk) tried to warn them that evil had targeted their baby. While Ben believed Susan, Ciara thought Susan was just a crazy woman with a delusion.

Ciara’s baby is safe and the devil is no longer in Marlena. So, the couple probably thinks they can let their guard down. However, it’s possible that their difficult decision about the baby could be a medical problem. It’s also possible that Susan’s new premonition means that the devil isn’t done trying to get Ben and Ciara’s baby. The devil might be out of Marlena, but it’s now in Johnny DiMera (Carson Boatman). Of course, nobody realizes that yet.

With that being said, Ben and Ciara have gone through quite an ordeal. So, it’s possible that Ben and Ciara will get to enjoy a bit of happiness for a while. So, what other decision about the baby could “CIN” struggle with during the week of January 10?

Days of Our Lives spoilers reveal that it’s possible the dilemma has to do with gender. It’s not known how far Ciara is right now. It seems as if she just found out she was expecting and it would be too early for a gender reveal. However, soap time is not the same as real-time. So, she could be much further along than viewers realize. Ben and Ciara might have to decide whether they want to find out the gender, or if they want it to be a surprise.

Another possibility – and the most likely scenario – is the struggle has to do with a baby name. Most first-time parents start talking about baby names right away. Now that Ben and Ciara have let their guard down, they can concentrate on their new baby. Going through all the possible names is something that parents debate about.

We know that Ciara will likely want to name the baby Bo after her late father. Ben wouldn’t have an issue with this, but it might be a matter of if Bo is the baby’s first or middle name. As for a girl, that might be a little more difficult. Ciara has a lot of women in her family – both alive and deceased – that she might admire. Ciara could pick one of these women to name her baby after.

As for Ben, he doesn’t have any good or stable people in his family, so we can’t imagine that he would want to name the baby after his sister or father. What do you think Ben and Ciara will name their baby? Is this what their new struggle is regarding the child?

GH Spoilers: Martin Does Not Intend On Losing Lucy Or Valentin