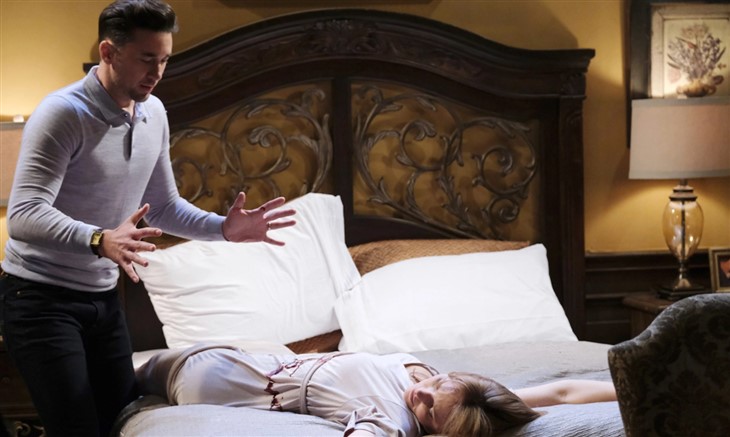 Days of Our Lives (DOOL) spoilers for the week of September 19 reveal that there are three must-see moments. Next week, Abigail DiMera’s (formerly played by Marci Miller) killer is finally exposed. Eric Brady (Greg Vaughan) and Nicole Walker (Arianne Zucker) confess their love for each other. Plus, Gabi Hernandez (Camila Banus) tries to reach Stefan DiMera (Brandon Barash).

DOOL spoilers reveal that one must-see moment during the week of September 19 is the truth about Abigail’s death. Ever since Abigail’s brutal murder, there has been a revolving door of suspects. However, the real killer still has not been identified.

That will all change next week. Fans will finally get to see what really happened the evening that Abigail was killed. It is also teased that when Chad DiMera (Billy Flynn) finds out the truth, he will load a gun.

Speaking of Abigail’s death, Leo Stark (Greg Rikaart) will be arrested. It happens after Leo begs Gwen Rizczech (Emily O’Brien) for help. However, Leo threw Gwen under the bus to save his own skin. So, Gwen will return the favor by alerting Rafe Hernandez (Galen Gering) to Leo’s location.

After Leo is thrown in jail, Craig Wesley (Kevin Spirtas) shows up at the police station. It is teased that Craig could be the one who killed Abigail and attacked Sonny Kiriakis (Zach Tinker). Would Craig really resort to murder to get revenge on Leo? Or could Craig have gone off the deep end after the humiliating wedding fiasco?

Days of Our Lives spoilers reveal that another must-see moment for the week of September 19 features Eric and Nicole. After denying their feelings, Eric and Nicole will finally confess to each other. The weekly preview clip shows Eric questioning Nicole about her passionate dream. This time, it seems like Nicole will be ready to tell Eric how she feels.

Fans can also expect Eric to open his heart to Nicole. The only problem is that “Ericole” could share a kiss or hop in bed before ending things with Rafe and Jada Hunter (Elia Cantu).

During the week of September 19, Gabi and Stefan will face each other again. Stefan will insist that he loves Chloe Lane (Nadia Bjorlin) and has no interest in Gabi. However, Gabi will challenge that. For a man who is disgusted by Gabi so much, he certainly does have a lot of encounters with her. Could Gabi actually reach Stefan’s heart and make him realize the truth?

Which one of these must-see moments are you interested in seeing? Share your thoughts and remember to keep watching the soap on Peacock.