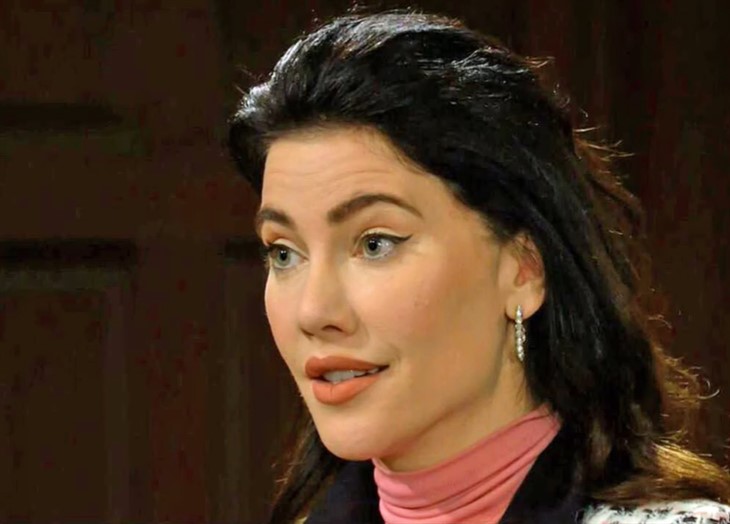 The Bold and the Beautiful (B&B) spoilers document that Steffy Forrester Finnegan (Jacqueline MacInnes Wood) is the one person Thomas Forrester (Matthew Atkinson) can turn to. The phone conversation Steffy walked in on at the design office at Forrester Creations was an intense soapy scenario.

How much did Steffy overhear? A similar eavesdropping scene happened elsewhere in Los Angeles, California, with Deacon Sharpe (Sean Kanan) walking in on an earlier phone conversation that Sheila had with Thomas earlier that day.

Deacon and Steffy appeared not to catch onto the drift of what Thomas and Sheila were discussing in those separate conversations.

The Bold And The Beautiful Spoilers – Thomas Forrester Needs Confidant

Thomas has repaired the relationship with his sister to the point where they are as good as ever. Steffy is likely someone Thomas can confidently confide in.

Keeping a secret at this level is taxing. But knowing that the princess of darkness, Sheila, is the person he is protecting is too much to handle.

So, Thomas must force himself to discuss what he learned from Sheila about Brooke Logan Forrester’s (Katherine Kelly Lang) New Year’s Eve night of drinking and what followed.

Steffy, like Thomas, prefers that their father reunites with their mother, Taylor Hayes (Krista Allen). So, it will be interesting to see how Steffy reacts, assuming that Thomas confides in her, as seems likely.

Sheila is not someone who Steffy trusts. Wood’s character and Thomas never expected the woman who shot their mother to be the person who engineered the downfall of Ridge Forrester’s (Thorsten Kaye) latest marriage to Brooke. But Sheila did exactly that.

So, if Thomas confides in Steffy, no matter how she responds, Thomas will lessen the burden on himself. He can also strategize with his sister.

The Bold And The Beautiful Spoilers – Sheila Carter Expects Support

Sheila put this scheme in motion to gain revenge against Brooke for threatening to prevent her from seeing John Finn Finnegan (Tanner Novlan) and his family. It would be naive to think she would not take advantage of the compromised position Thomas is putting himself into by keeping her secret from his father and Brooke.

While it might not be outright blackmail, Sheila is sure to apply pressure to Thomas to aid her attempts at forging a bond with Finn. Something as simple as talking her up could be the request.

Finn is teased to offer his mother a form of an olive branch shortly. So, viewers will soon see if his wife is aware of Sheila’s efforts to help Ridge and Taylor and how Steffy might feel obliged to reciprocate. That assumes Steffy does not reveal Sheila’s secret either.

Y&R News: Connor Floyd’s Cowboy Film Was The Role Of A Lifetime