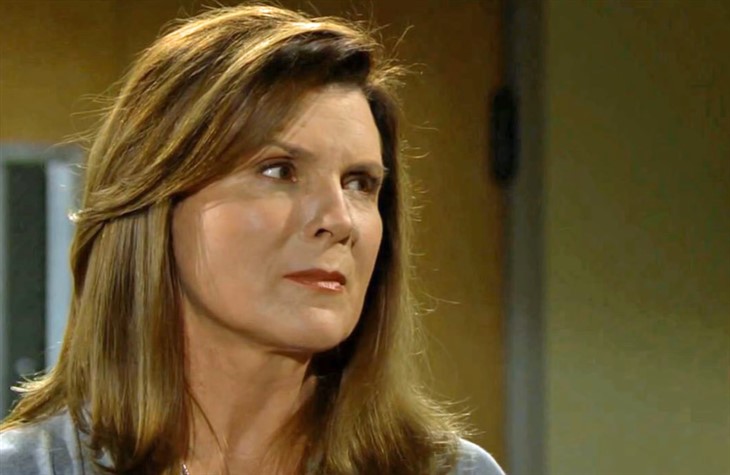 The Bold and the Beautiful spoilers document that Sheila Carter (Kimberlin Brown) is teased to escape from custody during her transfer to federal prison. But her exit is purposeful, as she wants to see her son.

Viewers know that John Finn Finnegan (Tanner Novlan) is not dead, as Sheila, Steffy Forrester Finnegan (Jacqueline MacInnes Wood), and everyone else believes. Li Finnegan (Naomi Matsuda) purposely completed a fake death certificate and then shuttled him off to where she is living.

Li has hidden Finn well these past weeks. But Sheila’s tenacity will expose Li’s secret.

The Bold And The Beautiful Spoilers – Li Finnegan Protected Her Son

Li decided not to allow Finn to exist on life support. She calculated that Steffy or Jack Finnegan (Ted King) would make decisions about his care and took that choice away from them.

Unlike Sheila, Li’s intentions were well-intentioned. She also has no known history of repeated criminal incidents.

Sheila will not see the goodness in Li’s actions, forgetting that she is the reason why Finn lies comatose in a hospital bed under his adoptive mother’s care. In a useful daytime coincidence, it just so happens that Li is an accomplished medical doctor who was on call the night Finn was rushed to the emergency ward.

B&B Spoilers – How Does Sheila Carter Continue To Elude Justice?

Sheila’s rap sheet is so long that all connected characters were forced to adopt the fans’ perspective. Residents of this fictional version of Los Angeles, California, had to suspend disbelief to accept that Sheila was released from prison a handful of years ago when she returned to town.

Only Sheila could luck into having an old contact, Mike Guthrie (Ken Hanes), appear as her transfer to a federal facility was scheduled. If not for that, an escape would not have been possible.

Li wanted to control the situation until Finn hopefully woke up. But Sheila’s intrusion means that Li will need help.

It will make sense if Li contacts Jack. They both detest Sheila, and he would help Li defend Finn from Brown’s character.

Li and Jack are estranged but bound by Finn, who can not be referenced in the past tense. So, an urgent plea for help might counter whatever measures Sheila plans to make once she learns that her bullet did not end his life.