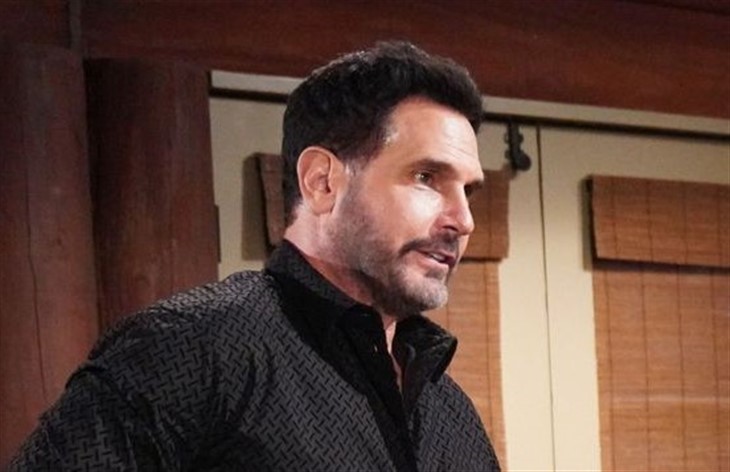 The Bold and The Beautiful spoilers and updates tease that Bill Spencer (Don Diamont) might finally give up on Brooke Logan (Katherine Kelly Lang) and start a new pursuit. He might try for a fresh start with Li Finnegan (Naomi Matsuda) since he was very drawn to her prior to Brooke becoming available.

The Bold And The Beautiful Spoilers – Damsel In Distress

Li was a damsel in distress and Bill her knight in shining armor when he found her in an alley after swimming for her life from the bay. Sheila Carter (Kimberlin Brown) had been in hot pursuit, and Li’s vehicle went off what appeared to be a bridge under construction into the bay. By the time she was found by Bill behind a seafood restaurant on the pier, she was in pretty rough shape, dehydrated and dirty.

Bill brought her to his condo and brought in Dr. Jordan Armstrong (Vincent Irizarry) to check her out. Eventually, she came back to herself and he learned she was the presumed dead John “Finn” Finnegan’s (Tanner Novlan) mother.

B & B Spoilers – Reuniting With Katie Logan Didn’t Fly

Bill tried reuniting with Katie Logan (Heather Tom) for years, but it just didn’t fly. She wasn’t going to take him back for the umpteenth time just for him to hurt her again, even though he would try to behave. Katie had been hurt by Bill just too many times over the years, even being dumped for her sister, although her loyalty to Brooke holds firm.

But he’s been trying to get Brooke back ever since Ridge Forrester (Thorsten Kaye) waffled to Taylor Hayes (Krista Allen) whose marriage may or may not come off. There’s that little matter of the call to Child Protective Services that Thomas Forrester (Matthew Atkinson) made with a voice changer app pretending to be Brooke. If Douglas Forrester (Henry Joseph Samiri) reveals the truth during the wedding, that could send Ridge back to Brooke.

The Bold And The Beautiful Spoilers – Maybe, Maybe Not

Of course, there is a chance the wedding will go off without a hitch even if Douglas does tell the truth. Ridge realized that Brooke had hurt him too many times over the years and he needed Taylor’s love, not Brooke’s control. Thomas no doubt will be in trouble with everyone, but that doesn’t change the truth, and Brooke will still be after Ridge-she always is.

That leaves Bill with a choice-be Don Quixote chasing Brooke windmills, or Prince Charming coming to Li’s rescue. The latter seems a much more successful pursuit for Dollar Bill.