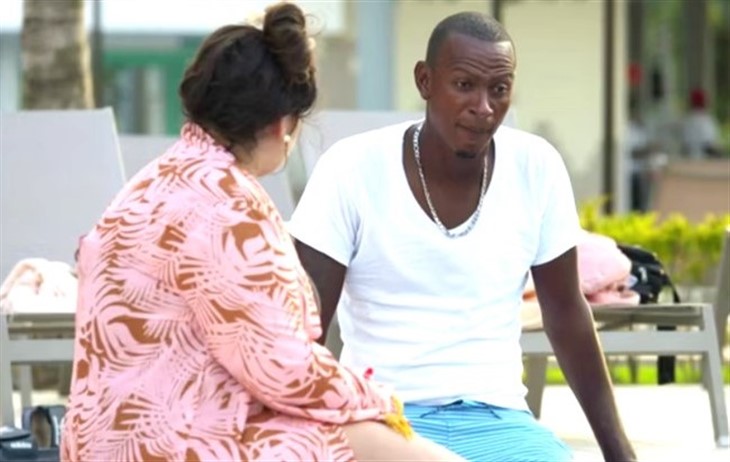 90 Day Fiance: Love in Paradise spoilers reveal that fans are curious about one of the couples on this season of the show. Aryanna Sierra and Sherlon McInnis have become fan favorites and as we follow them this season, things seem tense. This is why we are all curious to see if they are still together.

We first saw Aryanna and Sherlon on the first season of the show and they got to explain how they met and how they fell in love. Aryanna took a vacation to Jamaica when she met Sherlon. He was operating the tour boat that she was on and they hit it off pretty quickly. They had a lot of chemistry and they had a fling and that is when she got pregnant. She went back to Jamaica when she was six months pregnant so that they could work on things and figure out if they were going to be together. Sherlon had told her that he didn’t want to rush into anything even though they were having a child together.

Aryanna felt like he didn’t want to be responsible for this child and she wanted to marry him and get him to the states so that they could raise it together. When she got back, she had a baby boy, Odin. In this season, Sherlon got to meet Odin and Aryanna really wanted to try and get Sherlon to the states.

After Aryanna got back to Jamaica, she told the cameras, “The stakes are really high for this trip. Sherlon and I need to have a serious conversation about where our relationship stands, but I also need answers as to like, how he’s gonna step it up on his fatherly duties as well.” It turns out that Sherlon never filed the paperwork for Odin’s paternity and she was very upset about it.

Many of Aryanna’s friends believe that Sherlon is cheating on her and doesn’t want to claim Odin as his own. He did admit to her that he has friends with benefits and that he is not exclusive with her. As far as their social media accounts go, it looks as if these two could be broken up. They haven’t posted about the other in a few months, but since they are still under an NDA with the network, we will have to wait and see what happens next.