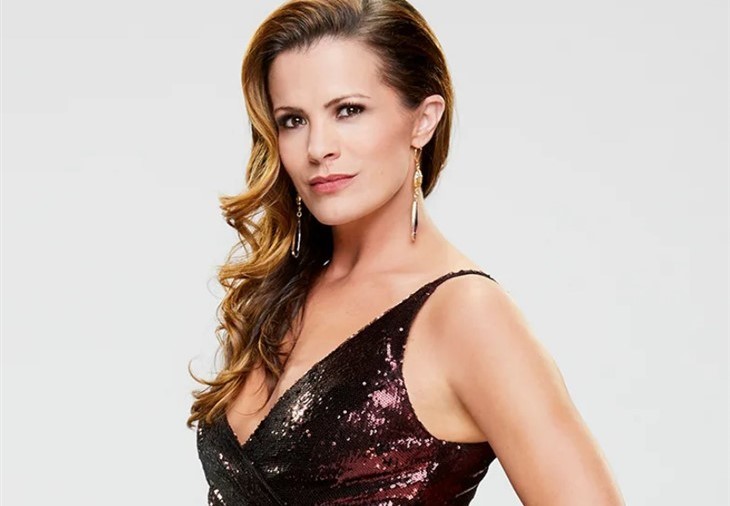 The Young and the Restless (Y&R) spoilers and updates tease that Melissa Claire Egan dropped by Entertainment Tonight as a guest co-host. The actress talked about her role as Chelsea Newman and her nomination for a Daytime Emmy award.

Back on May 25, The National Academy of Television Arts & Sciences released the list of nominees for the 48th annual Daytime Emmy Awards, which is scheduled to air on June 25. Egan scored a nomination for her role as Chelsea Newman on The Young and the Restless.

Jacqueline MacInnes Wood of The Bold and the Beautiful, Finola Hughes, Genie Francis, and Nancy Lee Grahn of General Hospital have been nominated in the same category as well.

This marks the sixth time she got nominated within her 15 years in the world of daytime soaps. But it’s her first nomination in the outstanding lead actress in a drama series category. She discussed Chelsea’s schemes and how her real-life husband Matt Katrosar ended up playing an EMT and her kidnapper on The Young and the Restless.

General Hospital Stars also dominated the Outstanding Lead Actor in a Drama Series category with Maurice Benard, Steve Burton, Dominic Zamprogna each scoring a nomination. The other nominees are Thorsten Kaye of The Bold and the Beautiful and Wally Kurth of Days of Our Lives.

The nominees for Outstanding Daytime Drama Series are The Young and the Restless, General Hospital, Days of Our Lives, and The Bold and the Beautiful. There were more than 2,700 submissions last year, which were judged by 1,000 peer professionals within the television industry.

The 48th Annual Daytime Emmys will air on CBS at 8pm on June 25. It will take place at ATI Studios in Burbank with limited guests. Viewers can watch the ceremony on CBS and stream live and on-demand through the CBS app and Paramount+. This marks the 15th time that CBS has broadcast the ceremony.

It will be hosted by Sheryl Underwood. Kathy Lee Gifford, Ken Jeong, Martha Stewart, and Robin Roberts will make special appearances as they pay tribute to Regis Philbin, Alex Trebek, and Larry King. The Bold and the Beautiful star Diamond White will also sing in the In Memoriam segment. Some of the presenters include Al Roker, Cynthia Watros, Robert Scott Wilson, Kelly Thiebaud, and Michelle Stafford.

Days Of Our Lives Spoilers: Robert Scott Wilson Teases A Happy Ending For Ben And Ciara