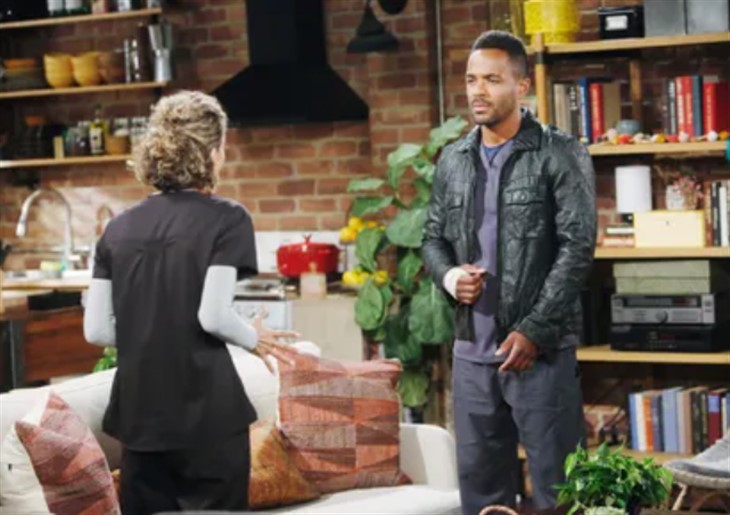 The Young and the Restless (Y&R) spoilers document that Elena Dawson (Brytni Sarpy) might be subconsciously sabotaging her relationship with Nate Hastings (Sean Dominic) in order to try and reclaim her life with Devon Hamilton (Bryton James). But Devon may no longer be within reach.

It is fair to wonder if Elena’s actions with Nate at the New Hope Clinic and recently with Devon at the penthouse, indicate a self-sabotaging personality? It’s possible that Elena doesn’t feel she deserves happiness in general, or specifically with either man.

Based on the special insight viewers have been allowed to have, they know that Elena still loves Devon. Her daydreams and regular dreams reveal her inner desires.

Devon became the love of Elena’s life during the past few years. She was there for him after his wife and Hevon’s expected baby tragically died. But as Elena has said, Devon was there to support Elena in her life as well.

The pairing of the characters Sarpy and James play was easy to root for. Knowing that the actors are a real life off-screen couple added to the fondness and support many in the audience felt for their on-screen personas.

Y&R  Recap And Spoilers – Why Nate Hastings At This Time?

It appeared as though Devon and Elena were heading toward a deeper commitment, meaning marriage. But the entrance of Amanda Sinclair (Mishael Morgan) into their lives changed everything.

The unbelievable, yet true, reality that Hilary Hamilton (Morgan) had an identical twin sister, who just so happened to come to Genoa City, Wisconsin, was no coincidence. Colin Atkinson (Tristan Rogers) identified Amanda as a ringer and used her look-a-like status to play with Devon’s head as part of a plan to steal the remainder of Katherine Chancellor’s (Jeanne Cooper) inheritance.

The initial conflict Devon and Elena had with Amanda, followed by her transformation into a friend, was too much for Sarpy’s character to take. Elena became paranoid and acted on it with Nate.

The Young And The Restless Spoilers – Devon Hamilton Also Rebounding?

Meanwhile, Devon seems to be using Amanda as a double substitute. She is linked to Hilary, but also serves as someone to be with after Elena.

Devon can’t honestly say that his developing feelings for Amanda aren’t, in some way, tied to Hilary. Yes, he sees them as different people, but some part of his soul appears to be reestablishing what he thought was lost forever.

There is a real possibility that he’s not rebounding, but is falling in love with Amanda, with Elena becoming a former significant other who he cares about and always will.

HH is a leading source for everything linked to The Young and the Restless. Check back regularly for Y&R spoilers, rumors, and comings and goings news!