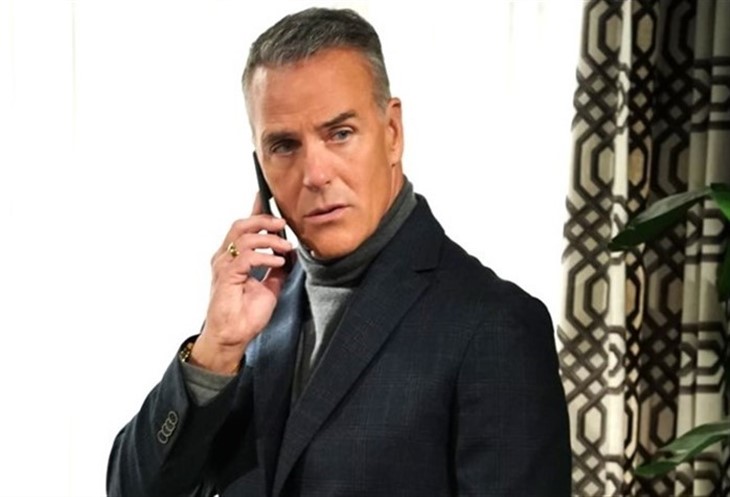 The Young and the Restless (Y&R) spoilers reveal that Kyle Abbott (Michael Mealor) and Tara Locke’s (Elizabeth Leiner) secret will soon come out. When it does, how will Ashland Locke (Richard Burgi) react? How will this affect how Harrison Locke is treated? Burgi teased what fans can expect, including how the paternity bombshell will shatter Ashland’s life.

The Young And The Restless Spoilers – Kyle Abbott Acting Suspicious

Y&R spoilers reveal that Kyle has decided not to pursue custody or visitation of his biological son. He is worried about how Ashland will go after the people he cares about. He also is concerned that Harrison Locke might end up being rejected or treated badly when the truth comes out. He doesn’t want his son to be traumatized by the only father he’s known. However, for someone who is trying to keep a secret, he’s not covering himself very well. In fact, he’s acting downright suspicious around Ashland.

Meanwhile, Tara is doing very well at keeping her secret, either. She might not be saying much, but it’s how she’s acting when Kyle is around. Plus, she couldn’t stop staring at Kyle while Ashland was right beside her. Then, we saw Tara really give it to Kyle, which was observed by Ashland. He’s clearly going to question her about it. There was speculation that Ashland might already know that Harrison isn’t his son. However, Burgi indicated that Ashland will be shocked by the revelation.

The Young and the Restless spoilers reveal that Ashland is going to find out that Harrison is not his child. When that happens, it will be a shock. Ashland’s life will be completely shattered, Burgi hinted. The actor told Soap Opera Digest, “What would it be like to have a child you think is your own but is not? Would that change your love for him? What would it be like if the rug was suddenly slipped out from under you and this is no longer yours and how would that change?”

Burgi compared his own life to Ashland’s. He mentioned that he has remarried and his current wife is quite a bit younger than him. The actor also said that he has stepchildren that he loves as if they were his own. So, he finds it interesting to see how Ashland’s relationship with Harrison will change, if at all.

Even though Kyle is worried that Ashland will reject and traumatize Harrison, there is another possibility. Ashland might not allow Kyle to take what he considers to be his. He seems like the type of man that won’t just relinquish his property or people very easily. This might include Harrison. We also don’t see Ashland is the type who likes to share. So, even if Kyle changes his mind and wants a relationship with his son, Ashland might do everything to stop that. We will have to keep watching the CBS soap to see what happens.

Was Stephanie’s Drinking Scene With Harris Staged For 90 Day Fiancé?