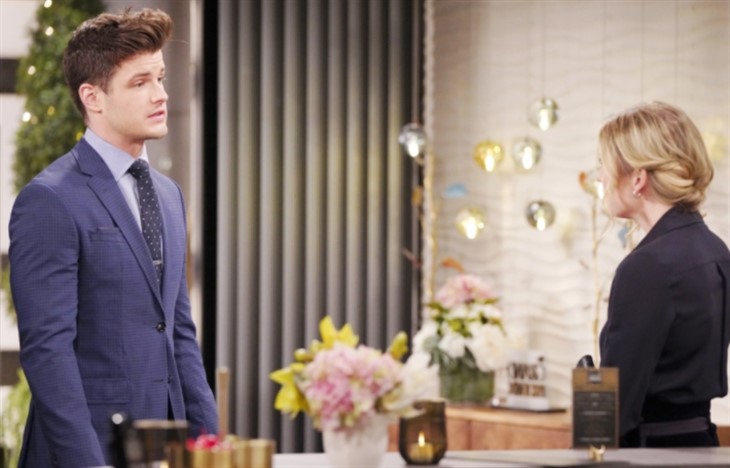 The Young and the Restless spoilers reveal that Tara Locke (Elizabeth Leiner) is taking full advantage of Summer Newman’s (Hunter King) exit. She’s trying to get closer to Kyle Abbott Michael Mealor). They go to the park and Tara likely plans for the perfect day of bonding. However, it takes a turn and Sally Spectra (Courtney Hope) could react to being betrayed.

The Young And The Restless Spoilers – Eliminating Summer Newman

Y&R spoilers reveal that Sally and Summer’s issues go back to when they first met. Despite making truces and getting in hot water with Lauren Fenmore (Tracey E. Bregman), it was never resolved. However, Summer had no idea just how much worse things would get when Tara came to Genoa City. Sally and Summer schemed together and it worked. Summer broke up with Kyle and moved to Milan, Italy.

During the week of July 12, Tara and Kyle will have a day at the park. They most likely take Harrison Locke (Kellen Enriquez). They will probably begin to bond as a family as that is Tara’s goal right now. Kyle has no idea of the person she really is and what she did to destroy his relationship.

The Young And The Restless Spoilers – Sally Spectra Betrayed

The Young and the Restless spoilers reveal that Sally got Summer’s job. When telling Tara about it, the schemer was talking like they were BFFs. However, Tara doesn’t care about being friends or helping Sally. She only worked with her because it would help accomplish her own agenda. It is confirmed that next week, Sally will realize that she’s been betrayed.

That is reason to believe that the person who crosses her is Tara. She might have gone after Sally’s new job title or said something to Lauren that causes problems. It’s possible that Tara warned Jack Abbott (Peter Bergman) about Sally not being as changed as he thinks. Now, whatever Tara does against Sally, it’s a big risk. With that being said, Tara must think the reward is worth the risk. It’s also possible that she assumes everyone will take her word over Sally’s.

It is confirmed that Tara and Kyle’s day at the park takes an unexpected turn. Could Sally realize that Tara betrayed her? Could she go searching for her, which leads to an explosive confrontation at the park? Sally will have a choice to make since Kyle is present. She can risk losing her second chance with Jack by exposing her own part in Summer’s exit. Or her rage could be more controlled with Sally being careful about what she says.

With it being teased that Mealor will be exiting the soap, Kyle and Summer probably reunite in Italy. That means he will need to find out the truth about his alleged baby mama.

The Bold And The Beautiful (B&B) Spoilers: Liam Spencer Is A Free Man

The Young And The Restless Spoilers: Kyle And Tara Kiss