The Young And The Restless Spoilers: Imani Obsessed, Nate And Elena Can’t Get Rid Of Third Wheel 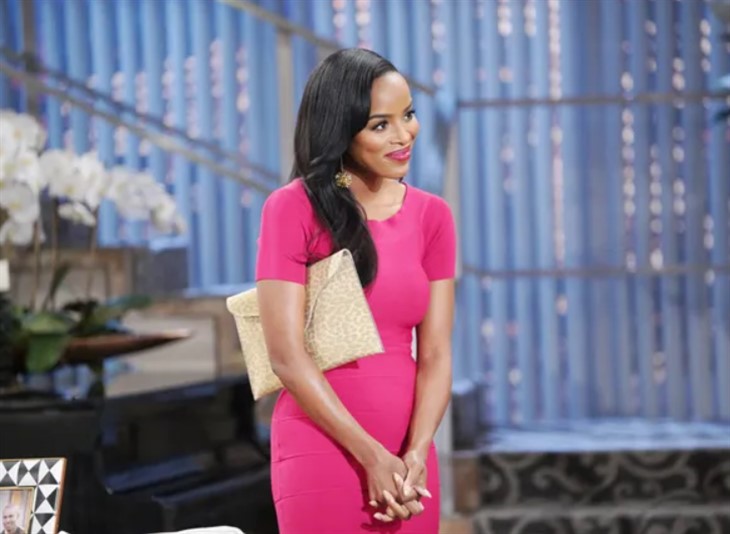 The Young and the Restless spoilers reveal that Imani Benedict (Leigh-Ann Rose) clearly is smitten with Nate Hastings (Sean Dominic). However, after Devon Hamilton’s (Bryton James) party, she apparently becomes obsessed with both Nate and Elena Dawson (Brytni Sarpy). The couple struggles to get rid of a third wheel. So, what’s up with this fixation on the pair?

The Young And The Restless Spoilers – Flirting With Nate Hastings

Y&R spoilers reveal that when Imani and Nate first met, she turned up the charm. She had coffee with him, too. However, Elena interrupted them and Imani excused herself. More recently, Amanda Sinclair (Mishael Morgan) invited her sister to Devon’s party. Imani openly flirted with Nate.

Now, it’s not clear if she is intentionally showing her interest. There are people who seem to flirt with everyone, but insist they are just being friendly. One thing that we do know is we haven’t seen Imani act that way with any other men. So, we are going to assume she wants Nate whether he has a girlfriend or not.

When Amanda introduced her sister to Elena, she was told that they already met. Then, the newcomer learned a bit about the complicated history between Amanda, Devon, Nate and Elena. She seemed impressed that they were able to still be friends after everything that happened.

The Young and the Restless spoilers confirm that during the week of July 12, Nate and Elena will struggle to fend off a third wheel. The only person this could be is Imani. She likely intentionally “bumps” into Nate, Elena or both of them repeatedly. She might even invite herself or tag along as Nate and Elena go about their daily lives.

The Young And The Restless Spoilers – Obsessed

So, is Imani becoming obsessed or is she just trying too hard to make new friends in Genoa City? If she is obsessed, is the target Nate or is it the couple that she’s fixated with? That’s a difficult question to answer right now. It’s possible that she is trying to insert herself into Nate’s life so she can increase the chances of something happening between them. Or she might be wanting to make Elena uncomfortable enough so Imani can be alone with Nate.

It might be Imani’s way of exercising her newfound freedom. Remember, she told Amanda that all of her friends and lovers had to be pre-screened and approved. We’ve seen her stand up to Naya Benedict (Ptosha Storey) for probably the first time ever. So, maybe Imani has no clue how to make friends without her family’s involvement and that’s all this is.

Then, there is the question of how far will this fixation go? Could Imani have some serious mental health issues? It wouldn’t surprise us considering the way she grew up. We will have to keep watching the CBS soap to find out what happens with this storyline.

Days Of Our Lives Spoilers: Chanel In Limbo, Awkward Run-In With Allie And Tripp After Passion

The Bold And The Beautiful (B&B) Spoilers: Liam Spencer Is A Free Man