The Bold And The Beautiful Spoilers: Quinn Can’t Replace Zoe, Carter Still In Love With Ex 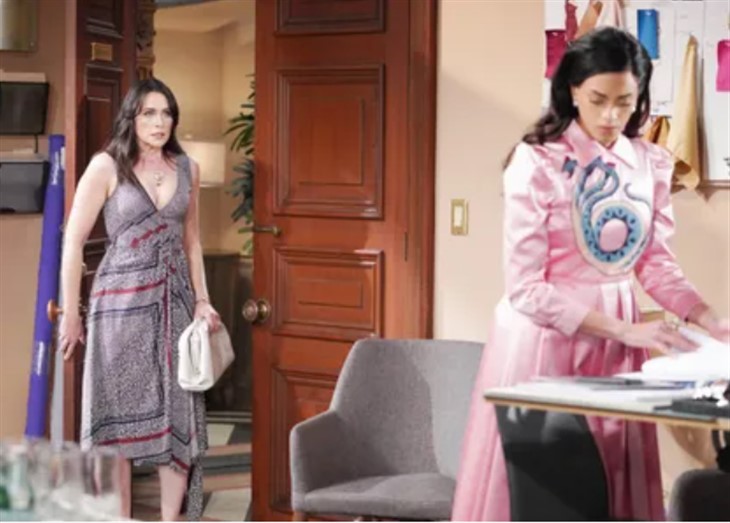 The Bold and the Beautiful spoilers reveal that Carter Walton (Lawrence Saint-Victor) and Zoe Buckingham (Kiara Barnes) are over. However, he still has feelings for his former flame, the actor confirmed. In fact, those feelings for Zoe will remain even though Carter is sleeping with Quinn Forrester (Rena Sofer). What does this mean for Carter’s future?

The Bold And The Beautiful Spoilers – Carter Walton’s Heartbreak

B&B spoilers reveal that Zoe broke Carter’s heart into a million pieces. He was completely in love with the model. He planned on getting married, having children with Zoe, and living the rest of his life with her. However, that all came crashing down when Ridge Forrester (Thorsten Kaye) told him the truth about Zoe and Zende Forrester (Delon de Metz). Even though Carter broke up with Zoe, that hasn’t eliminated the pain he still feels.

Zoe hasn’t allowed Carter any time to process everything. If she would just back off for a while, Carter might have already come back to her. Instead, she is relentlessly pushing and becoming obsessed with getting him back. Instead of drawing Carter closer to her, Zoe is just pushing him away. In fact, if Zoe would have just concentrated on working on her own issues, then Carter and Quinn might not have ended up in bed together.

The Bold And The Beautiful Spoilers – Affair With Quinn Forrester

The Bold and the Beautiful spoilers reveal that Carter and Quinn are currently having an affair. It was unexpected, but it makes sense why they ended up together. They are both feeling heartbroken, rejected, and lonely right now. Quinn hasn’t really had anyone to talk in-depth about what’s going on with Eric Forrester (John McCook). Sure, Shauna Fulton (Denise Richards) is her BFF, but she has even held back from her.

Then, there is Carter, who has struggled with his heartbreak by himself. He opened up to Quinn and she opened up to him. So, they have bonded over both feeling unvalued and unloved.

Even though Carter and Quinn will get closer, that doesn’t replace the people they really want to be with. We know that Quinn wants Eric back. However, Saint-Victor said something surprising to Soap Opera Digest. Apparently, the affair will not get rid of Carter’s love for Zoe.

“Things are about to get so much more complex. Carter has feelings for Zoe that are not going to go away. But as Carter gets closer to Quinn, he doesn’t know up from down anymore, and that is what is so interesting.”

So, that makes us wonder if eventually, the two will reconcile. That brings up the question of what is going to happen when Barnes exits in early July. Will she actually be recast? That remains to be seen and we’ll have to keep watching to see how this story unfolds.

The Bold And The Beautiful (B&B) Spoilers: Justin Takes Over Spencer…

The Bold And The Beautiful (B&B) Spoilers: Dollar Bill Is Furious, Can’t…