The Bold And The Beautiful Spoilers: Brooke Considers Keeping Quiet 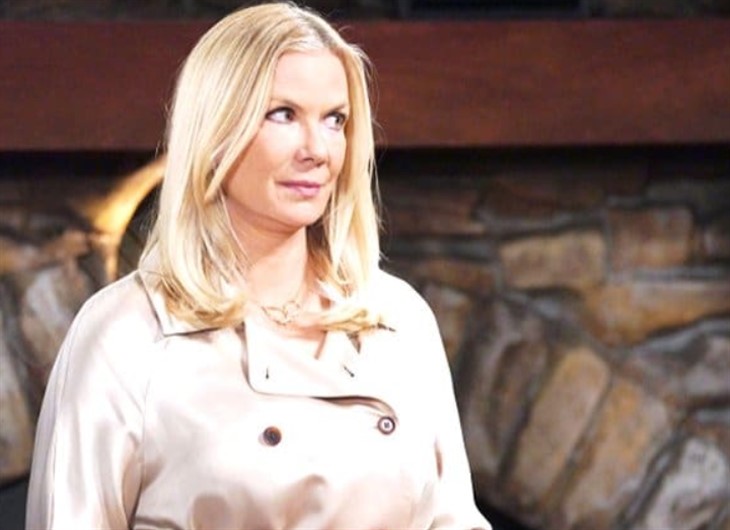 The Bold and the Beautiful spoilers reveal that Paris Buckingham (Diamond White) tells Brooke Logan Forrester (Katherine Kelly Lang) about “Quarter.” Fans knew Brooke would love to deliver some karma to Quinn Forrester (Rena Sofer). However, the actress explained that Brooke actually hesitates and for a moment, considered keeping her enemy’s secret.

The Bold And The Beautiful Spoilers – Breaking ‘Bridge’ Scheme

B&B spoilers reveal that several months ago, Quinn broke “Bridge.” As fans recall, Quinn used Bill Spencer’s (Don Diamont) kiss to destroy Brooke and Ridge Forrester’s (Thorsten Kaye) marriage. The couple did break up but as always, eventually found their way back into each other’s arms. Quinn has never really paid the price for that scheme and Brooke would love to get some payback.

Brooke has that opportunity when she learns shocking information from Paris. The Forrester Foundation newcomer tells Brooke the truth about Carter Walton’s (Lawrence Saint-Victor) fling. Brooke is stunned to learn that Carter and Shauna Fulton (Denise Richards) never slept together. Instead, the woman in Carter’s bed was Quinn, who just happens to be the boss’ wife!

The Bold And The Beautiful Spoilers – Brooke Logan Forrester’s Quandary

The Bold and the Beautiful spoilers reveal that fans assumed Brooke would love to get revenge. However, Lang told Soap Opera Digest that it’s more complicated than that. She admitted that yes, Brooke would love some karmic justice, but that isn’t her primary motivation. Her main concern is how hurt Eric Forrester (John McCook) will be when the truth comes out. So, for a brief moment, Brooke actually considers keeping her enemy’s secret.

“Of course, she doesn’t want to hurt Eric but at the same time, he can’t go on living a life with this woman and not see who she really is. Especially if she is constantly lying to him and having affairs and doing all of this stuff behind his back… she doesn’t want to see Eric get hurt, but he’s already getting hurt… he just doesn’t know it.”

Brooke decides that as much as she wants to protect Eric, he needs to know the truth. She will let Eric make his own decision about his future with Quinn. But he can’t make the right decision unless he has all the information. This is what prompts Brooke to deliver such a crushing blow to Eric. Not only will it devastate him, but Brooke can’t get over the timing. The truth comes out during Eric and Quinn’s vow renewal ceremony.

It is teased that there will be explosive and catastrophic fallout. We expect Eric to file for divorce and Zoe Buckingham (Kiara Barnes) ends up leaving L.A. However, will Carter be able to keep his job or will he get fired? With both of them suddenly single in the next few weeks, will Quinn and Carter consider a relationship? Or can they really stay away from each other and go back to being just friends?