The Bold And The Beautiful (B&B) Spoilers: Will Shauna And Flo Have Trouble Because Of Quinn? 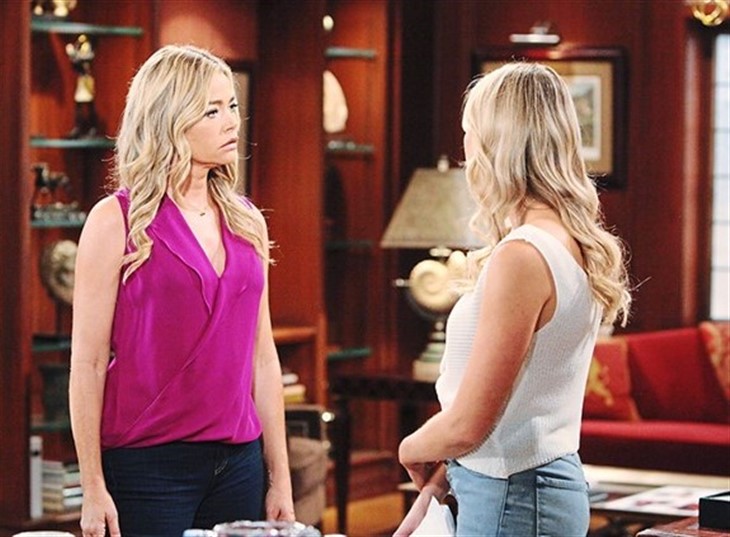 The Bold and the Beautiful (B&B) spoilers and updates reveal Shauna Fulton (Denise Richards) and Flo Logan (Katrina Bowden) have a good mother and daughter relationship. Shauna has supported Flo when she was in trouble. She had gotten involved in a scheme that Dr. Reese Buckingham (Wayne Brady) had set into motion involving Hope Spencer (Annika Noelle) and Steffy Forrester (Jacqueline MacInnes Wood).

Shauna helped Flo to find a way to overcome the situation that she was in. She helped Flo to reunite with her childhood sweetheart Wyatt Spencer (Darin Brooks). Shauna supported Flo when she found out that her father was Storm Logan (Willaim deVry). Flo found that she was part of the Logan family. It has taken Flo some time to get the approval of her family because of the situation involving Hope and Steffy. Flo and Shauna have had support from Shauna’s best friend Quinn Forrester (Rena Sofer) to help them with Flo to get into the good place that she is in now.

Shauna and Quinn have been friends for years. They have helped each other through many difficult times. Shauna has been trying to help Quinn with her marriage to Eric Forrester (John McCook). Quinn and Eric have been having trouble with their marriage because Quinn interfered with his son Ridge Forrester (Thorsten Kaye) and Brooke Logan Forrester’s (Katherine Kelly Lang) marriage. Quinn believed that Shauna would be a good match for Ridge. However, Ridge and Brooke stayed together. Eric has been upset that Quinn would try to damage Ridge’s marriage. Eric has not been able to be intimate with Quinn. Quinn has been trying to help Zoe Buckingham (Kiara Barnes) to repair her relationship with Carter Walton (Lawrence Saint-Victor). However, Quinn and Carter have begun to have an affair. Quinn told Shauna about the affair. Shauna was shocked but has tried to make sure that Quinn does not lose Eric.

Flo wants to keep the respect and trust that she has with the Logan family. Brooke talked to Flo about Quinn. Brooke is still upset that Quinn nearly destroyed her marriage to Ridge. Flo wants to support Quinn because she is her mother’s best friend. Quinn is also Wyatt’s mother. Flo has known Quinn for most of her life and cares about her. She will want what is best for Quinn. However, Brooke and the rest of the Logan family will not what is best for Quinn when they find out about Quinn’s affair with Carter. Brooke believes that Quinn should not be a part of Eric’s life. She may try to go after Quinn in some way. Flo will be in the middle of the situation with Quinn, Eric, and Carter.