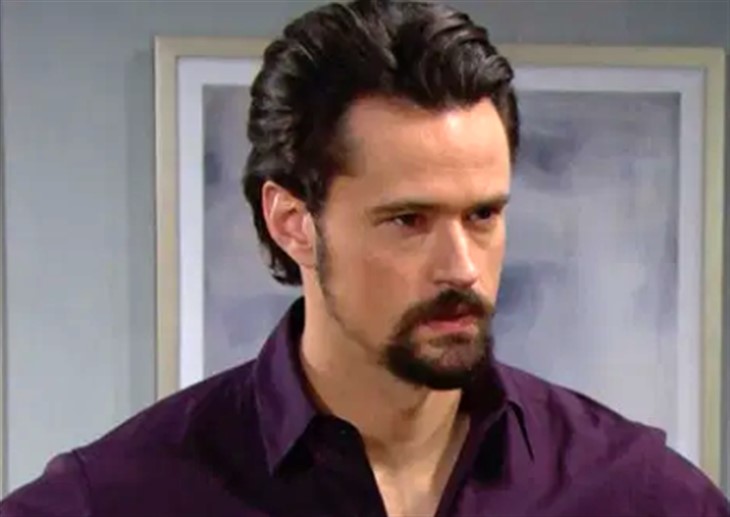 Viewers of The Bold and The Beautiful will remember from previous episodes how Vinny kept pushing and pushing Thomas about having a new opportunity to win Hope back. Thomas was not interested in scheming to get Hope back, he has worked for months to become a man who can be trusted not only by Hope, but by her family and especially by his little boy, Douglas Forrester (Henry Joseph Samiri). Vinny had also offered Thomas some potent pain pills for residual pain from his brain operation, but Thomas didn’t want what Vinny was “selling”.

The Bold And The Beautiful (B&B) Spoilers: Liam Prepares For New Baby – Will Hope Stay?

He knew that is how his sister got addicted back a few months ago. Vinny also of late has been talking about a new job he got, but he didn’t like having to punch a time clock and actually having to work to be paid! Vinny kept droning on about how he thought he could help Thomas get hope back, and also when Thomas found out the baby was Liam Spencer’s (Scott Clifton) he wanted Thomas to clarify that was what he wanted!

Plus, B&B spoilers reveal since Vinny took that job he’s been seen in attire that looks suspiciously like a white lab coat. Access to pain pills plus white lab coat might indicate Vinny works in the hospital! However, he is quite unlikely to be a lab or pharmacy technician although he might have access to the lab – he’s probably either a janitor or an orderly and it’s not his white lab coat he’s been styling in!

The Bold And The Beautiful Spoilers: Thomas Forrester Is Thinking More Clearly, Puts Two And Two Together

The Bold and the Beautiful spoilers teaseThomas feels horrible for the whole heartbreaking situation that his sister and his friend are in. The last thing he wants is for Steffy’s relationship or Hope’s to be irretrievably broken, although when it comes to the waffling weasel Liam, he wishes Hope could get rid of him for good, and Steffy as well! He’s seen both Hope and Steffy be hurt too many times by the lascivious Liam!

Anyone can see straight through him that he is only happy when he can get what – or –who – he cannot have, and he’s in it for the thrill of the chase, and never satisfied with the capture! When he was with Steffy he wanted Hope. When he’s been with Hope he’s wanted Steffy, and this has gone on for years on The Bold and the Beautiful! Now that the paternity test has come back positive for Liam being the father, and Vinny has been poking and prodding him to take his chance to win Hope back, and asking him if Liam’s being the father was what he wanted, Thomas has an epiphany!

The Bold And The Beautiful Spoilers: What Does The Future Hold For Steffy, Liam, Wyatt, And Flo On B&Bhttps://t.co/5fD7wtx7Kp

He knows that Vinny’s job is in the hospital, and whatever he does there, he has access to the pharmacy and the lab, as well as many other places. He suspects that Vinny skewed the results of the paternity test, and while he appreciates Vinny being such a good friend that he would do that so he could have Hope, he doesn’t like the hurtful fallout that came with it!

The Bold and the Beautiful rumors and spoilers hint Thomas decides that the best way he can help Hope and Steffy is to bust Vinny for skewing the results of the paternity test, and he knows the perfect person to talk to about his suspicions – Dr. John Finnegan (Tanner Novlan)! Thomas gives Finn a call to meet in private as soon as possible, and it’s nothing to do with his head!

The Bold And The Beautiful (B&B) Spoilers: Kiara Barnes Is All About…

The Bold And The Beautiful (B&B) Spoilers: Steffy Puts Liam In His Place,…