The Bold And The Beautiful (B&B) Spoilers: Karma Hurts, Zoe Walks In On Carter And Quinn’s Sizzling Sexcapade 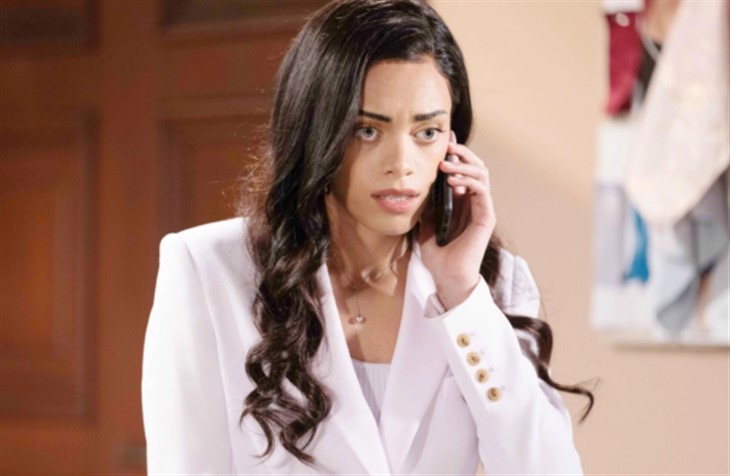 The Bold and the Beautiful (B&B) spoilers reveal that Paris Buckingham (Diamond White) tries to get Carter Walton (Lawrence Saint-Victor) back with his ex. He might end up back with Zoe Buckingham (Kiara Barnes). However, she might catch her man getting freaky with Quinn Forrester (Rena Sofer)! This would be karmic justice and also gives Barnes an exit story.

The Bold And The Beautiful Spoilers – Zoe Buckingham’s Seductive Deception

B&B spoilers reveal that Zoe was dating Carter when suddenly, Zende Forrester (Delon de Metz) returned from Paris. Even though his family and everyone at the fashion house knows Zende, it was the first time Zoe had laid eyes on him. She was immediately smitten but we’re not sure if she was attracted to Zende’s looks, personality, or his ties to the Forrester empire. She mentioned several times that she was a huge fan of his work. Perhaps Zoe thought sleeping with a designer could boost her social status.

In any case, Zoe was not available and should never have flirted with Zende. The same goes for the young man, who was also Carter’s oldest friend. At least Zende cut it out when Zoe got engaged. We can’t say the same for the model. However, we are glad Ridge Forrester (Thorsten Kaye) caught Zoe trying to desperately seduce Zende.

Carter learned how frequently and easily Zoe deceived him. He called off the engagement and wanted nothing more to do with her. However, Zoe hasn’t stopped begging for another chance. When that didn’t work, Quinn Forrester (Rena Sofer) went to bat for the model. Next, Zoe asked Ridge and Eric Forrester (John McCook) to talk to Carter. It is already confirmed that Ridge decides to grant her request. However, Eric has relationship issues of his own right now.

It is confirmed that Carter is hearing what all these people are saying but has not reconciled with Zoe. Next week, the model will ask for Paris Buckingham’s (Diamond White) forgiveness. This prompts Paris to convince Carter to give his former flame another chance. It is suggested that Carter just might give in after he’s practically ganged up on by half the staff.

The Bold And The Beautiful Spoilers – Quinn Forrester’s New Man

The Bold and the Beautiful spoilers for May Sweeps confirm that Quinn will have a new man in her life. She has been pushed away and rejected by Eric ever since they got back together. It’s clear Eric is debating whether to stay married or file for divorce. No matter what he decides, Quinn informs him that her portrait stays on the mantle.

It’s clear that Quinn’s new man must be Carter. The two have chatted about both of their relationship issues. Quinn even went as far as to discuss her sex-starved life since moving back into the Forrester estate. Quinn’s intent was to get Carter and Zoe back together. However, once she saw him wearing only teeny tiny workout shorts, Quinn couldn’t stop drooling.

The Bold And The Beautiful (B&B) Spoilers: Killer Bill And Katie Face The Police https://t.co/GQ17UoXCOl pic.twitter.com/yzvBz2fwNk

It is confirmed that Barnes will be making her exit from the CBS soap soon. She is trading in her soap storylines for a primetime gig on Fox. She landed a series regular role in the Fantasy Island reboot. So, how will Zoe leave the soap? There is talk that despite getting back together with Carter, she could get hit with karma. This time, Zoe will know what it feels like to be betrayed. Is it possible that she walks in on Carter and Quinn’s sizzling between the sheets? We will have to keep watching to find out!