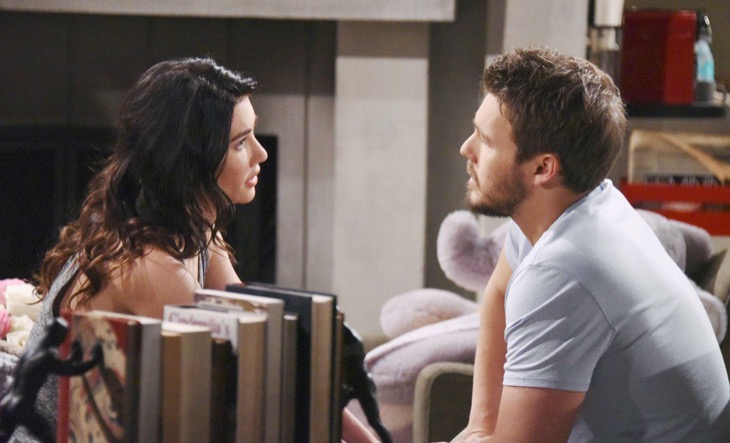 The Bold and the Beautiful spoilers tease that new realities will emerge through the self-reveals that Liam Spencer (Scott Clifton) and Steffy Forrester (Jacqueline MacInnes Wood) offer. New couple’s arrangements and a shift in combined Forrester and Logan family focus happen.

Hope Spencer (Annika Noelle) is on a glide path toward reverting to being Hope Logan. The outright betrayal of their vows that Liam impulsively pursued and has now admitted can not simply be forgotten with the passage of time. It’s part of his pattern, with the latest sway being in Steffy’s direction. But the Sinn pairing represents a different consideration to be made.

It’s possible that this new reality will convince Hope that Lope wasn’t right from the start. Liam had a child with Steffy first and then only went back to Hope after Wood’s character told him to do so, with Beth Spencer (Madeline Valdez River Davidson) being on the way at that time.

The sheer gall of Liam in accusing Hope of kissing Thomas Forrester (Matthew Atkinson) will be glaring when she wasn’t even in the apartment at the time of the misconceived kiss. That conclusion won’t be lost on Hope, who has been fully loyal to Liam despite Thomas’ incessant pitches for her to be with him.

John Finnegan (Tanner Novlan) will have a much different consideration to make if he is confirmed as the father of Steffy’s baby. There is no history of her going back and forth between him and Liam, with Hope’s tortuous experience standing in contrast.

So, if Finn is going to be a father, he could be strongly influenced by the rush of emotions. Plus, the obligation to provide his child with a happy home from the start of her, or his life, will be compelling.

The Bold And The Beautiful Spoilers – Liam Spencer Is The Ogre

To date, Thomas has been the number one ogre. That changes now, with Liam sporting the negative tag for awhile.

Brooke Logan Forrester (Katherine Kelly Lang) and Ridge Forrester (Thorsten Kaye) will brandish their momma and papa bear badges as Hope and Steffy need parental care. Brooke would be wise to focus on Liam’s role in this scenario. Doing so will allow her to keep the peace with Ridge by not being overly critical of Steffy.

Ridge, knowing that Steffy is only months removed from her pain-killer ordeal, will be deeply disappointed in Liam’s actions. But Kaye’s character might also become aware that another Steam child could be on the way, which would conflict with Ridge’s view of Liam.

Royal Family News: Prince William And Prince Harry Could Confront Each Other At Diana’s Statue Unveiling