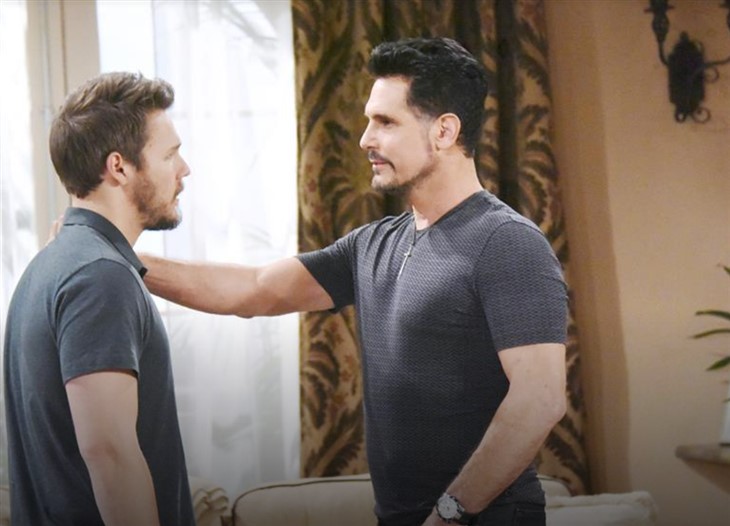 The Bold and the Beautiful (B&B) spoilers document that Bill Spencer (Don Diamont) will support Liam Spencer (Scott Clifton) with needed life advice. It’s rather ironic that this father and son are moving in different directions because Bill was broken and Liam was alright a short time ago.

Batie appears near to a full reconciliation, which could offer Liam hope. Hope, when used as a noun, relates to the expectation that something can happen. Hope, the first name, relating to Annika Noelle’s (Hope Spencer) character, is the person who Liam betrayed. That’s what Bill did to Katie Logan (Heather Tom) last year.

Batie has experienced many ups and down through the years. This enduring relationship has changed. But it’s never actually broken, as evidenced by the multiple reunion storylines.

Katie has never written Bill totally off. That’s partially why she was open to the efforts Brooke Logan Forrester (Katherine Kelly Lang) and Donna Logan (Jennifer Gareis) made when speaking on Bill’s behalf. Katie also listened to Wyatt Spencer’s (Darin Brooks) plea for his dad.

Bold And The Beautiful Spoilers – Lope Is Badly Fractured

Hope hasn’t asked Liam for a divorce. She didn’t say all is forgiven either. Basically, Liam’s reconciliation efforts have been paused.

Anyone with an awareness of this situation should give credit to Hope for offering Liam extreme benefit of the doubt. Based purely on him thinking he saw Hope kissing Thomas Forrester (Matthew Atkinson), when a mannequin was in play instead, Liam stormed to the cliff house and weeks later was identified as the father of Steffy Forrester’s (Jacqueline MacInnes Wood) baby.

So, Lope isn’t solid or broken. It’s fractured, which is why Liam could use advice from his dad, who has much experience in such matters.

The Bold And The Beautiful Spoilers – Projecting The Spencer’s Future

Batie is a good couple. Yes, Bill is a goof. But he’s learned his lesson and the writing staff seems ready to send him, Katie, and Will Spencer (Finnegan George) ahead. That’s cool and makes sense.

As for Lope, that couple might be broken along with the Steam pairing. It will be intriguing to see where Clifton takes this character if Liam is, in fact, setting sail in a new direction. This actor is strong, which gives all fans confidence that he’ll take the assumed new script shift and make it fully compelling.