The Bold And The Beautiful (B&B) Spoilers: Bill And Brooke Leave Their Past With Each Other Behind For Good 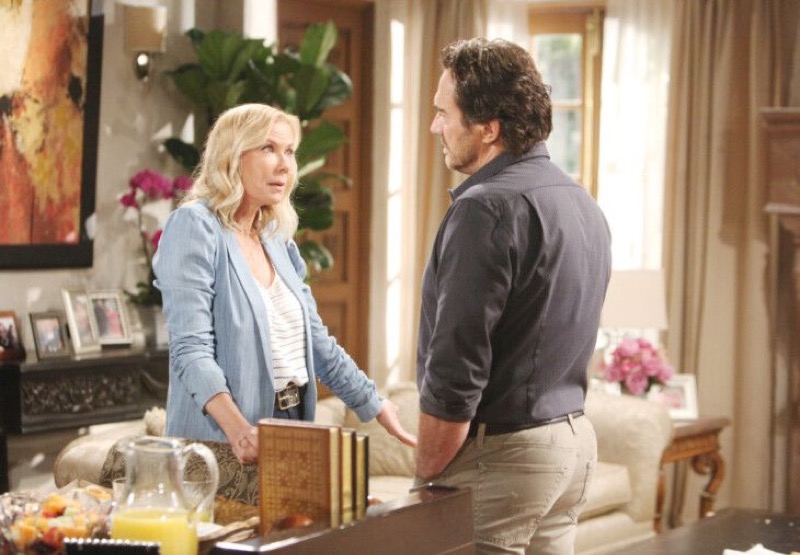 Viewers of The Bold and The Beautiful will remember when Bill and Brooke blew up their relationships when their indiscretion in Hope Logan Spencer’s (Annika Noelle) cabin was publicly exposed. They had fallen into temptation stemming from their past romance and marriage and had been filmed kissing and making out through a window by Shauna Fulton (Denise Richards) who happened to be passing by. Quinn Forrester (Rena Sofer) had taken advantage of the video to blow up Brooke’s relationship with Ridge Forrester, (Thorsten Kaye) who had just reconciled with her so she could get Shauna and Ridge together.

She downloaded the video to a digital photo frame given to Brooke as a gift, and it played out in front of all who had gathered to celebrate Brooke and Ridge’s reunion at the Forrester mansion! But as there were two people involved in the indiscretion, it blew up Bill and Katie Logan Spencer’s (Heather Tom) marriage as well. Now, several months later, Brooke and Ridge are finally in a good place again and Bill is trying to get back into a good place with Katie! Independently, they know they must each leave their past with each other behind for good and relate differently to each other when circumstances dictate that they must relate at all! Instead of ex-lovers and ex-spouses, they need to relate to each other as brother and sister in-law, regardless if Katie takes Bill back or not!

The Bold And The Beautiful (B&B) Spoilers: Vinny’s The Puppetmaster, Two Reasons Why He Tampers With DNA Test

Obviously, both Bill and Brooke regret their indiscretion and their weakness the night that video was taken. It was wrong for Shauna to take it, it was wrong for Quinn to show it. But that doesn’t make what they did right. They had still felt a pull towards each other from the past, and they know to move on with their lives that they have to let their past relationship with each other die, and make sure it stays buried! No secret torches, no burning embers, it needs to be as if they were never together! The soul ties between them need to be broken and then destroyed. Brooke needs to commit to Ridge as her one and only, and no more breaking up and finding their way back to each other – even if their current situation with her daughter being hurt by his daughter tries to interfere.

Bill’s son was involved too, after all, and she’s blaming Liam Spencer (Scott Clifton) for his own part in the mess. Bill’s sons’ hurting her daughter never interfered between her and Bill and shouldn’t between her and Ridge, either. Brooke plans to stick to her guns. As for Bill, he wants Katie back more than anything. He has realized he loves Katie more than his own life, and he now feels horrified that he pitted sister against sister in his heart and actions! From now on, Bill and Brooke, without even communicating it to one another will have a totally new and appropriate way of relating to each other!