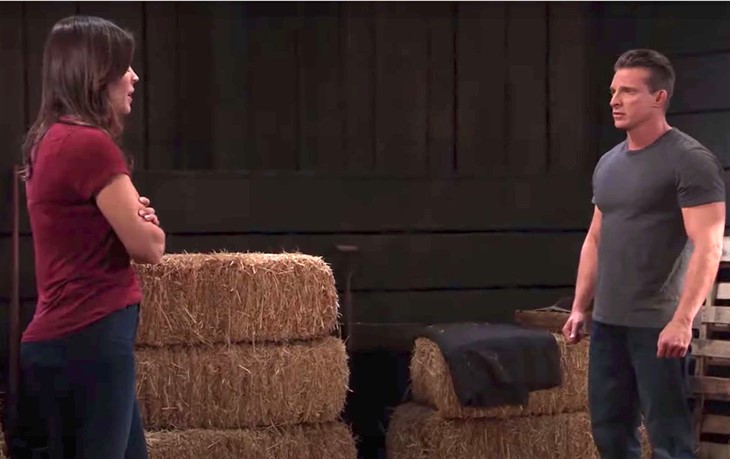 General Hospital (GH) spoilers for Thursday, July 1, 2021, reveal in Port Charles, NY Jason having news for Britt she is definitely not expecting.

Britt (Kelly Thiebaud) is sure she and Jason would fast become an item and is not ready to hear what he has to say. She thinks it will be something about their future but instead, she learns they have no future. Jason (Steve Burton) is going to marry Carly (Laura Wright). Does he tell her the reason he plans to marry Carly — that it’s all a show and he isn’t in love with Carly? He really just seems to be in love with the mob business and will do anything to save it.

How will Britt react when Jason has been her rock of late and she is still dealing with the fact that she has the marker for Huntington’s Disease?

GH Spoilers – Carly Corinthos Has An Announcement To Make

Carly gathers her family in a celebratory area with pink balloons and can’t wait to tell them something. That’s right. She and Jason are getting married. Sonny (Maurice Benard) has only been allegedly dead for six months, so that’s long enough to get remarried, right? Will anyone question this marriage or will they just take it at face value?

Meanwhile, Nina (Cynthia Watros) is still debating what to do about her man in Nixon Falls. Should she stay in Port Charles where she seems to feel comfortable and happy to get back to work at Crimson? Ava (Maura West) questions her odd choice of a friend and wonders if Nina thinks she has a future with the man Nina calls Mike.

The Port Charles teen scene will soon become the Port Charles college scene now that Joss (Eden McCoy), Cam (Will Lipton), and Trina (Sydney Mikayla) have graduated high school. And it’s graduation party time at Curtis’s new club. That’s where sparks fly between Curtis (Donnell Turner) and Portia (Brook Kerr) and Trina makes sure Joss and Cam are still friends. Can there ever be more? The teen scene also needs some romance, something that has been lacking of late. Stay tuned to General Hospital weekdays to see how these stories play out.

Days Of Our Lives Comings And Goings: Suzanne Rogers Returns To DOOL – Maggie Back In Salem