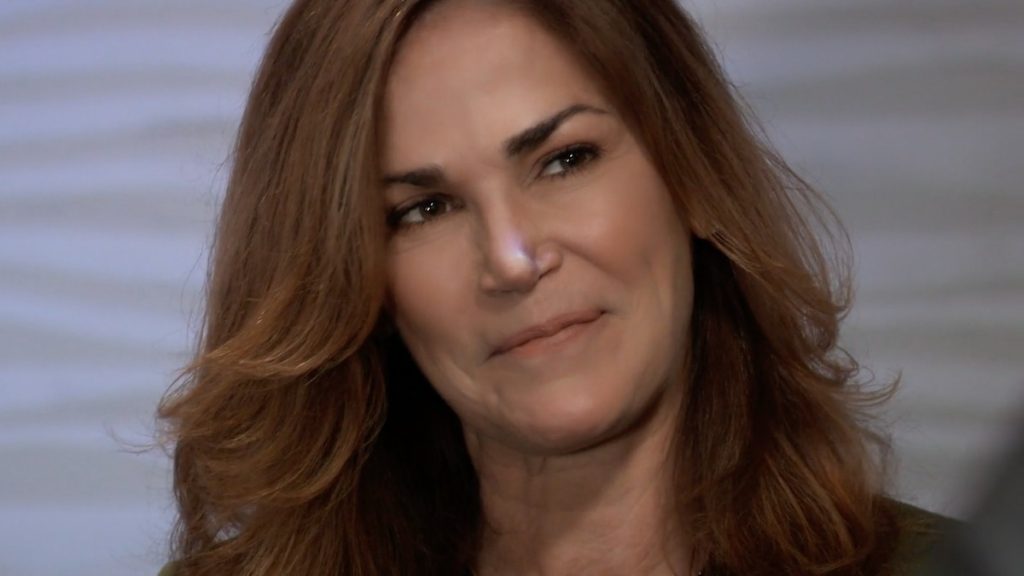 General Hospital (GH) spoilers indicate that Jackie Templeton (Kim Delaney) will begin to make good on the promise she made to Mayor Laura Collins (Genie Francis). Jackie vowed to Laura that she would finish what Laura’s daughter, Lulu Falconeri (Emme Rylan) started. Lulu had been committed to writing an expose on Cyrus Renault (Jeff Kober) to expose Cyrus as a dangerous drug lord. Unfortunately, Lulu was seriously injured in the explosion at the Floating Rib and is currently in a coma as her brain works to heal from the trauma.

General Hospital Spoilers – Jackie Templeton was bitter and angry when she left Port Charles decades ago.

As viewers know, Jackie had short-lived romances with both Luke Spencer (Anthony Geary) and Robert Scorpio (Tristan Rogers) when she lived in Port Charles decades ago. Robert and Jackie were pretty serious for a while, at least until Robert married Holly Sutton (Emma Samms) in order to prevent Holly from being deported. As fell in love with Holly for real, his feelings for Jackie subsided, and eventually an angry and bitter Jackie left Port Charles. It had been decades since Robert last saw Jackie until she returned to Port Charles a few months ago at the request of Lulu.

So the first thing Jackie did when she saw Robert again after all those years was to punch him right in the gut. It seemed to be cathartic for Jackie as she and Robert were suddenly in each other’s orbit once again. It was long before Jackie let people know that she and her husband, Gregory Chase (Gregory Harrison) were separated. Robert also asked Jackie to attend Anna DeVane’s(Finola Hughes) wedding as his guest.

General Hospital Spoilers – Jackie Templeton won’t stop until she gets the story.

Jackie is determined to dig up whatever she can find in order to produce that Lulu can’t right now. But aa proven many times in recent months, Cyrus has no qualms about killing anyone who get in his way or who he perceives as a threat. This will concern Robert who will likely insist on providing as much in the way of protection as he possibly can. But as they spend more and more time together, could the past become the present once again. Jackie would most likely be hesitant at first given their history, and the newness of her separation from Gregory. But Jackie loved Robert passionately once before and there’s every chance that lightning just might strike twice!

Will Jackie find the perfect angle for the Cyrus Renault expose? Will she be able to finish what Lulu started? Will danger and a possible second chance with Robert be in Jackie’s future? Old loves become new again in Port Charles so stay tuned to General Hospital airing weekdays on ABC. And don’t forget to check back here regularly for all your General Hospital news, information and spoilers!