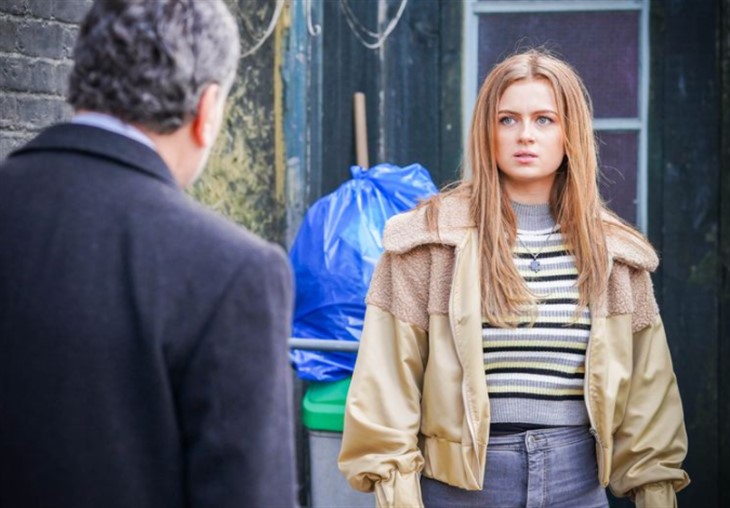 Eastenders spoilers and updates reveal Tiffany Butcher-Baker will face consequences in the next episode following the failure of Dotty’s overcharging schemes.

Previously, Dotty Cotton (Milly Zero) has persuaded the teen to join her treacherous business at the club. Tiffany (Maisie Smith) and had mentioned to Dotty that she and her husband (Zack Morris) are out of pocket at the moment.

At first, Dotty proposed to Ruby Allen (Louisa Lytton) that she should employ Tifanny and friends in exchange to promote her club on social media to attract more customers, but Ruby wasn’t convinced.

Dotty thought of a dangerous offer as a hostess at Ruby’s but Tiff contemplated about it long. Her husband, Keegan’s objection to her flirting with other drunkards, made up her mind of rejecting the offer.

Keegan’s reactions fueled Dotty’s annoyance, which led her to think of putting up their rent to threaten them.

Later at the club, Dotty faced trouble with some rude clients to which Tiffanny rushed to rescue her. The former begged her to reconsider the offer after witnessing how convenient it is for Tiffany to be around.

After involving in Dotty Cotton’s dirty schemes of overcharging drinks while flirting with businessmen, Tiffany is set to face grave danger.

The upcoming episode will show Tiffany spoiling herself with a fancy dress in which her husband, Keegan, will be confused about. Keegan will have just set up his new stall on the market by then, but Tiffany did afford to buy the expensive dress, not knowing it was Dotty who had delivered the cash from their hostess trick.

With the earnings Tiffany got, she uses some of it to start Keegan’s catchy social media page and encourages her husband to go live by showing the customers how he prepares food.

A series of consequences will burst Tiffany’s bubbles from here. As Tiffany leaves, still thrilled for Keegan’s success, a furious club customer named Greg confronts her after discovering their over-charging schemes at the club. Dotty comes to defend Tiff.

More trouble comes when Ruby at the club gets involved. She revealed she’d also receive a complaint from a fuming customer about Dotty and Tiff’s schemes.

But Dotty’s plans don’t end there, in fact, she encourages Tiff to target a group of single men. But Tiffany is distracted by hearing a group of girls bashing her about Keegan’s video. Earlier, the couple only realizes it late that they had started live streaming while Keegan was naked and still changing for work.

A disturbed Tiff targets a lone man instead, not realizing angry Greg is observing her near.

As Tiff arrives home later, Greg meets her in her hallway asking for his money back!