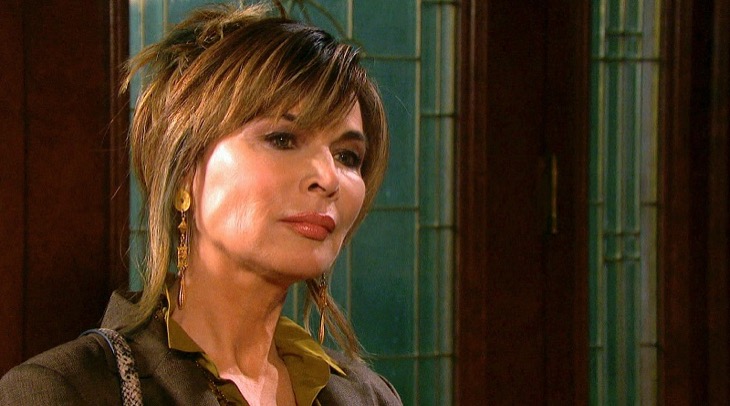 Days of Our Lives spoilers tease that in Salem Kate Roberts (Lauren Koslow) will try to convince Chad DiMera (Billy Flynn) to come clean to Abigail DiMera (Marci Miller) before Gwen Rizchech (Emily O’Brien) beats her to it in an upcoming episode of Days of Our Lives!

Days of Our Lives viewers will recall that Gwen covered for Chad when first confronted by Abigail. Abigail found out that Gwen was stalking her and her family for unknown reasons, which Gwen claimed was just doing research on her employer! Usually people don’t collect newspaper clippings that go back years on employers!

Then she lit into Gwen about why she booked a hotel room at the Salem Inn using her credit card, and why neither she nor Chad returned back to the DiMera mansion the night before! Of course Abigail suspected Chad had cheated on her with Gwen, but Gwen covered for him (and herself) by painting a photo of a desperately broken man who drunk himself into a stupor, and Gwen couldn’t let him drive home so the two did spend the night together, but he was passed out.

Chad didn’t disagree with Gwen when she told Abigail the tall tale. But because of that, Chad has to deal with Gwen having this information to hold over his head. The truth was, Chad was disastrously drunk, but he and Gwen did the dirty deed before he fell asleep! He immediately regretted his actions once he woke up and realized what had happened. The hapless Chad is just beginning to get it through his thick head that Gwen is in essence, blackmailing him and that she is every bit as evil as his late father was!

Chad has been having several interesting conversations with Kate lately ; she has been involved and or married to several of the DiMera men, so she’s in the family circle. Kate confessed to him recently that it was her, not Abigail, who was sleeping with Jake Lambert, now known as Jake DiMera (Brandon Barash)! Days of Our Lives viewers will recall that Gwen had been pushing the narrative that Abigail was cheating on Chad with Jake quite hard! That was also discussed in the volatile argument that Gwen, Abigail and Chad got into when Abigail fired Gwen and told her to get herself and her things out of the DiMera mansion! Chad realizes that he is in a real mess now, and confides in Kate about his dilemma.

Kate gives him some tried and true advice; it would be best that he come clean to Abigail and tell her about his night of sin with Gwen before Gwen beats him to it! Kate wouldn’t trust Gwen as far as she could throw her, and that is not just from hearing Jake’s tales of woe from his former relationship with her!

Chad is afraid of the blowup that he and Abigail would have if he confesses, but Kate assures him it will be much better coming from him first than it would if Gwen told Abigail first! Chad would be perceived as a lying liar who lies and continues to lie, and trust would never be able to be rebuilt, Kate explains. Chad finally sees what Kate is saying is probably true, but fears how Abigail will take his heartfelt confession!