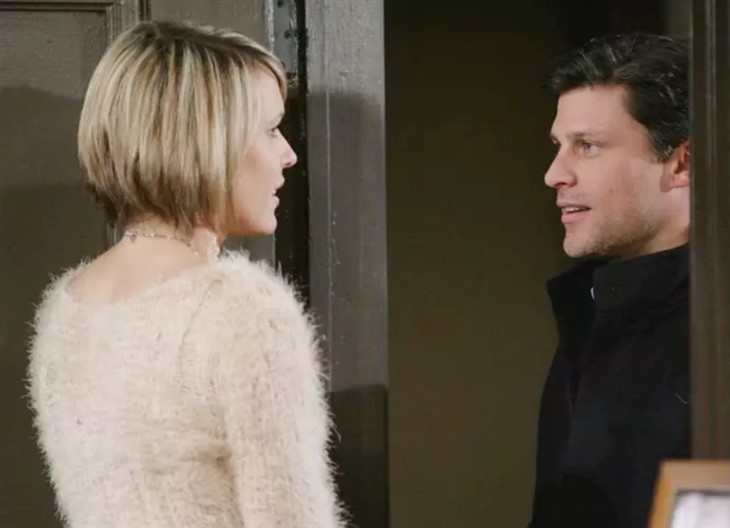 Days of Our Lives spoilers reveal that Eric Brady (Greg Vaughan) returns to Salem to evict the devil from Marlena Evans (Deidre Hall). However, that won’t be Eric’s only interaction. During this visit, Eric also visits Nicole Walker (Arianne Zucker). Eric could be the person that helps Nicole follow her heart. Do Nicole and Rafe Hernandez (Galen Gering) belong together?

DOOL spoilers reveal that Eric returns and it seems that he is back to being a priest. In the winter promo, Eric is dressed in his priestly attire and is ready to battle Satan. Unfortunately, the devil has inhabited Marlena’s body once again and John Black (Drake Hogestyn) is desperate to save his wife. It will take many people to defeat the devil, though. The whole family unites to save Marlena. This includes Eric, John, Brady Black (Eric Martsolf), Belle Brady (Martha Madison), Sami DiMera (Alison Sweeney), Allie Horton (Lindsay Arnold) and Johnny DiMera (Carson Boatman).

However, Eric will take the time to visit one other person after saving his mother from the devil. That person is his soon-to-be ex-wife, Nicole.

Even though Eric was furious and heartbroken over Nicole’s betrayal with Xander Cook (Paul Telfer), some time has passed. Eric is a man of God and has likely forgiven Nicole. Eric probably also understands what led Nicole into the arms of another man. Eric abandoned his wife and although it was for a good cause, Nicole was all alone for nearly a year. It doesn’t excuse Nicole’s cheating, but does explain it.

Days of Our Lives spoilers reveal that Nicole and Rafe both have feelings for each other. However, Nicole is determined not to split up Rafe’s current romance with Ava Vitali (Tamara Braun). Nicole and Ava are friends – at least they were until Ava saw “Racole” kissing. Of course, Ava didn’t let them know what she saw and when questioning the former flames, they both lied to her face. So, Ava will be out for revenge.

Nicole seems to think that sleeping with EJ DiMera (Dan Feuerriegel) will help her forget about Rafe. That isn’t happening, though. Instead of forgetting about Rafe, she keeps running into him and the two can’t seem to resist each other. Eric might provide Nicole with some guidance and words of wisdom about her love life.

Even though Eric will always be heartbroken over Nicole’s betrayal, he loves her so much that he wants her to be happy. So, expect Eric to help Nicole follow her heart, which could send her running into Rafe’s arms. However, what does this mean for Ava? How far will she go to get revenge over being betrayed by both her boyfriend and best friend? We will have to keep watching the NBC soap to find out.