Days Of Our Lives Spoilers: Eric Distracts Nicole, Too Busy To Notice Sami’s Ready To Strike 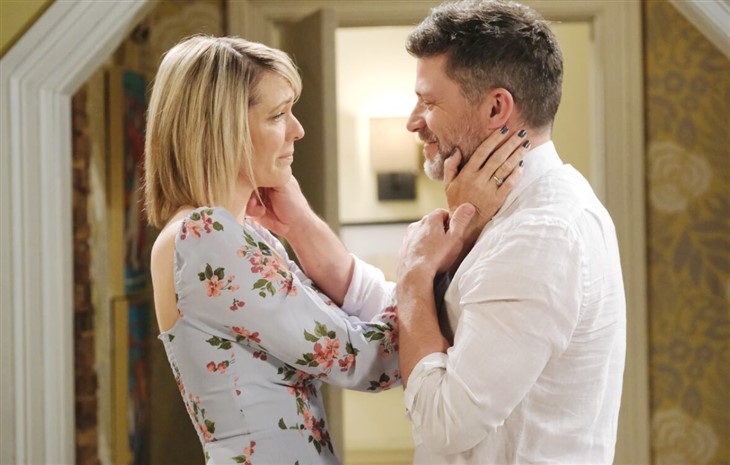 Days of Our Lives spoilers reveal that Eric Brady (Greg Vaughan) returns during the week of July 12. When he comes home, Nicole Walker Brady (Arianne Zucker) will be overjoyed. She will be busy spending time with her husband and planning an anniversary party. While she’s distracted, Sami DiMera (Alison Sweeney) is working overtime to publicly expose Nicole.

Days Of Our Lives Spoilers – Two Cheaters At War

DOOL spoilers reveal that Sami and Nicole can’t stand each other. However, they really are more alike than either of them would care to admit. Both have scandalous pasts, are notorious schemers, are extremely selfish and have betrayed their husbands. Sami is being hypocritical in slamming Nicole for cheating. After all, Sami did the exact same thing by sleeping with Lucas Horton (Bryan Dattilo).

As for Nicole, she is addicted to betrayal. She’s cheated on pretty much every man she’s ever been with. So, her betrayal isn’t a surprise, although it was a shock to find out her latest side piece was Xander Cook (Paul Telfer). Plus, Nicole wouldn’t be “victimized” by Sami and Xander’s blackmail if she would just tell Eric the truth.

Eric is confirmed to be returning next week. When he comes back to Salem, Nicole will be thrilled. The two will be spending a lot of time together, including plenty of alone time in bed. So, we don’t expect Nicole to be doing much work at Basic Black. We also don’t expect her to be socializing with the people helping her to expose Sami.

The latest Days of Our Lives update is Brady Black (Eric Martsolf) promised Nicole he would do whatever is necessary to fix the Xander problem. Ava Vitali (Tamara Braun) has been relaying information about “Lumi” to her friend. Plus, Chloe Lane (Nadia Bjorlin) gave Nicole a huge nugget with Lucas and Sami’s brain tumor scheme. In fact, Nicole confronted Lucas and gloated about knowing about “Lumi.”

Days of Our Lives spoilers reveal that Nicole plans an anniversary party after Eric returns. That will occupy her time, which means she won’t be focusing too much on Sami. However, Sami will still be working overtime to expose Nicole and Xander’s affair. In fact, with Eric back in town, Sami will want to split the couple up as quickly as possible. She ends up tempting Xander with an offer. We don’t know if Xander takes the bait, but it is teased that a party blows up.

We can’t see Nicole exposing Sami sleeping with Lucas at her own anniversary party. Even though EJ DiMera (Dan Feuerriegel) will be attending, Nicole wants to focus on Eric. She’s not going to ruin her own party and Eric will probably be disappointed in Nicole causing drama.

What we do think will happen is Nicole will be focused on Eric and the party planning. So, the mission to expose Sami might go on the back burner. However, Sami will think the anniversary party would be the perfect place to expose Nicole’s cheating. So, not only will Nicole be humiliated as Eric learns the truth, all of their family and friends will publicly judge the cheater’s actions. How will Nicole explain this and could she fire back by exposing “Lumi” to EJ?

The Young And The Restless Spoilers: Tara Tricks Sally, Frames Ashland To Look Like A Monster

The Bold And The Beautiful (B&B) Spoilers: Did Vinny Really Kill Himself For Thomas?