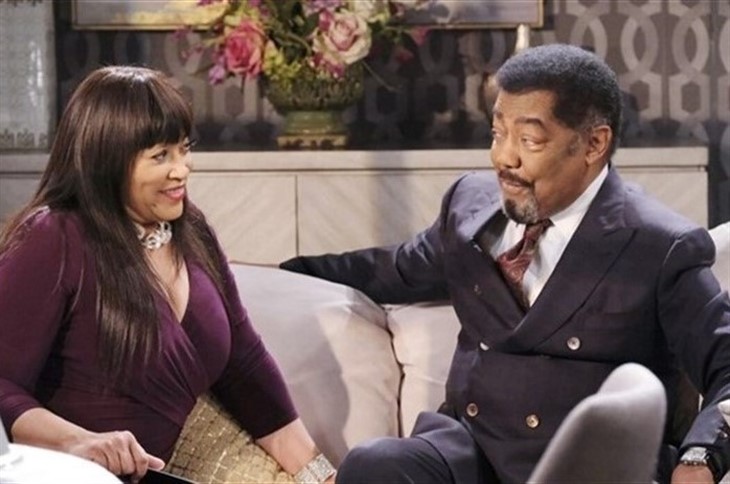 Days of Our Lives (DOOL) spoilers tease that Paulina Price (Jackeé Harry) has some big plans for Horton Town Square, and she will tell Abe Carver (James Reynolds) all about them in an upcoming episode of Days of Our Lives!

Paulina, an extremely successful Black businesswoman and Lani Price Grant’s (Sal Stowers) maternal aunt, Tamara Price’s (Marilyn McCoo) sister, hit Salem like a bomb blast! One of the first things she noticed about Salem is that there weren’t enough Black businesses there and even discounted Gabi Hernandez, (Camila Banus) a Latina, and bought her Gabi Chic store right out from under her after Jake DiMera (Brandon Barash) had given it back to her! Paulina even included Gabi in her statement to Abe at the time that Horton Town Square was “too white”! Paulina doesn’t appear to consider that Abe is the mayor, and usually where there actually is racism there is not a Black mayor, or a Hispanic Police Commissioner, for that matter – Gabi’s older brother Rafe Hernandez (Galen Gering).

Days Of Our Lives (DOOL) Comings And Goings: A Fan Favorite Returning With A New Face

Salem’s lack of Black owned businesses in Horton Town Square can likely simply be attributed to not that many Black families living in the community; the ones who do live there are either Carvers or Prices. They are all involved in either law enforcement or politics, Abe himself having once been Salem Police Commissioner. Eli Grant (Lamon Archey) had been the Salem Police Commissioner for a time when Rafe had left for Mexico at the behest of his and Gabi’s father, but now both have returned. But Paulina’s sole focus seems to be on retail stores – she hasn’t so far expressed an interest in The Salem Inn or said anything about it. She hasn’t said anything about Salem University Hospital, either.

Considering how Paulina had been offended that Julie Williams, (Susan Seaforth Hayes) had been chosen by Lani and Eli to be godmother to their twins instead of her, and called her “an old white woman” she may well want to not only fill the town square with Black owned and focuses businesses, she may want to change the name as well, to honor a Black icon! Paulina has just enough nerve and is just overbearing enough to do something like that, and such a suggestion would definitely not go over well with Abe!

Abe started as a cop on the beat with the Salem Police Department back in 1981, where he had been investigating Anna DiMera, (Leann Hunley) then Anna Brady’s, married to Roman Brady (Josh Taylor) claims that she had been sold into white slavery. Later he joined with Roman, and Bo Brady (Peter Reckell) to take down Stefano DiMera (Joseph Mascolo), although of course The Phoenix never stayed down long! After some years of police work and rising through the ranks to become Salem Police Commissioner himself, he decided to run for mayor when he wanted to rid the city of corruption under a previous mayor’s term, and with only a few years’ exception, has been mayor of Salem ever since.

Days Of Our Lives (DOOL) Spoilers: Jan Wakes Up From Her Coma – Belle Panics https://t.co/GtsLDg7viK pic.twitter.com/tY8bDabrHR

Abe has been there long enough to have known Dr. Tom Horton (Macdonald Carey) and his wife Alice Horton (Frances Reid) personally, and knows that they were deserving of the honor of having the town square named after them and the plaque memorializing them. Abe doesn’t have a problem with new Black businesses coming in but he’d draw the line at renaming the town square! Can’t you just see the look on Abe’s face and on Paulina’s when he leans in and tells her he doesn’t think so – and that Tom and Alice were “that old white woman’s” grandparents? He may not have been where he is today if it weren’t for their welcoming attitude!