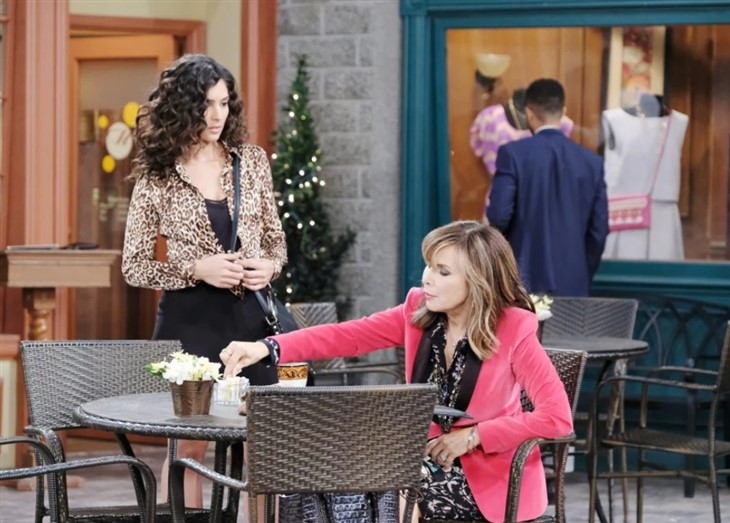 Days of Our Lives (DOOL) spoilers suggest that Kate Dimera (Lauren Koslow) still feels threatened by Gabi Dimera’s (Camila Banus) presence in Salem and wants her gone. Kate feels that Gabi is the one person who could sabotage her relationship with Jake Dimera (Brandon Barash) and isn’t about to let that happen. Kate will try to get Philip to back out of his deal with Gabi to protect her and Jake’s relationship, but will he comply?

Days of Our Lives Spoilers –  Kiriakis Just Signed This Deal

Days of Our Lives spoilers indicate Xander Kiriakis (Paul Telfer) just signed this deal with Gabi before he quit the company. Xander that he would have the job at Titan CEO when he hammered out this deal with Gabi. Unfortunately, Xander was once again pushed out by Victor Kiriakis (John Aniston) because of Philip. Gabi may have to work out another deal with Philip on DOOL. However, Philip may not give her the deal Xander offered and may back out of it altogether.

DOOL Spoilers – Philip Kiriakis Does What His Mother Says

Days of Our Lives spoilers tease Philip loves to get to Brady Black (Eric Martsolf) any way he can. Gabi Chic would be in direct competition with Basic Black, Brady’s company. Xander originally wanted to help Gabi with the company because of this. Philip knows that Brady blames him for the mess with the Vitali mob that ended up getting him shot recently.

With Xander out of the company and Victor’s love for Brady on DOOL, Philip would do anything to get rid of him. Philip also blames Brady for the fact that Chloe Lane (Nadia Bjorlin) refuses to give him a second chance. Philip believes that Chloe has feelings for Brady and that is why she wants nothing to do with him. Will Philip keep Gabi Chic just to be a competition for Brady?

Days of Our Lives Philip looks out for himself more than anyone. If getting rid of Gabi is beneficial to Philip, he may agree. However, keeping Gabi at Titan could help Philip in the end.