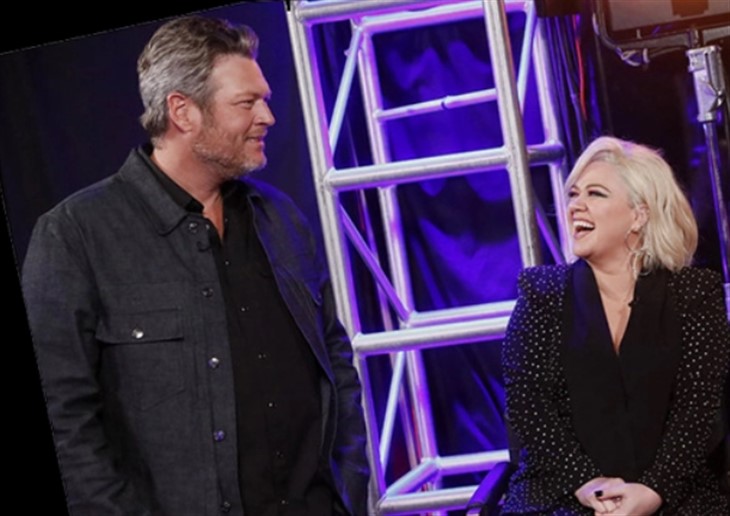 It Is always exciting to see the judges on the popular ABC show, The Voice, engage in a friendly feist when it comes to convincing contestants on the show to be part of their team. There is a sense of fulfillment and utmost pride if a contestant from your team goes on to win the show. The excitement was what we got when judges on the voice, Kelly Clarkson and Blake Shelton engaged in a friendly spat as they tried to convince a contestant they both liked to be part of their voice coaching team.

Blake took a jovial jab at the “Breakaway” singer for trying to convince a contestant on the show by talking about her winning experience on another music talent show, The American Idol. It would be recalled that Kelly won the first edition of that show years back when it was aired on Fox Channel. The subsequent editions of the show will later be aired on the ABC Network.

The friendly feist all started when Kelly referred to her experience of making it to the finals of a musical talent show and winning it, in her attempt to lure contestant Gihanna Zoe to become a member of her team. We think it might have been a factor in her final choice, but Zoe did join Kelly’s team eventually. Good move, Kelly.
Kelly later revealed during the same episode of the show, that she had tried to convince another contestant,

Deion Warren to join her team by using the same move. But it didn’t work out as he joined the team of Nick Jonas, another judge on the show who challenged him to go for a team. coached by a judge who wanted to prove his worth rather than experience.

Blake Shelton  – Lots Of Friendly Vibes Between The Judges

Carson Daly, who is the host of the show, had earlier on in the episode made mention Kelly been the first winner ever of the American Idol. He said that gave her the edge in terms of experience over other judges on the show. In response, country music star Blake joked that the show didn’t get enough ratings on Fox and was eventually canceled.

He further joked by saying that Kelly was a bad judge as she could not get a complete team on the show. Blake has got lots of jokey lines up his sleeves for real.

Blake Shelton Has Epic News For Fans Of Him And Gwen Stefanihttps://t.co/oTpxlBFY3e

Blake Shelton  – Lots Of Friendliness Between Kelly And Blake

Fans of the show are used to Blake and Kelly playfully taking jibes at each other during the show. In an earlier episode, Blake jokingly said that Kelly had forgotten her country music roots and was more involved in Hollywood. In response, Kelly took a playful jab at the “God’s Country” singer for constantly been on the covers of tabloids and his engagement to a former judge of the show, Gwen Stefani.

You can get more of the exciting lines and rich voices on The Voice which airs on NBC every Monday and Tuesday evenings.