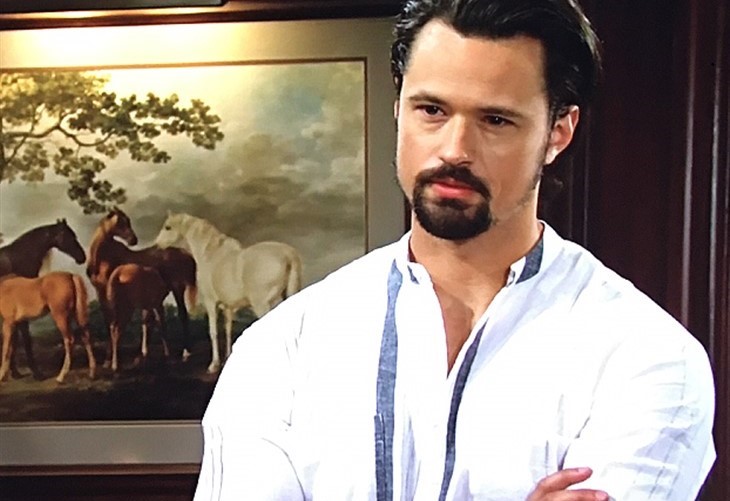 The Bold And The Beautiful Spoilers – Zende Plans Some Romance

The Bold And The Beautiful’s Zende wants to have a romantic evening with his girlfriend Paris. However, Thomas has set his eyes on Paris himself and does not believe she needs to be with Zende. Zende has no idea that Thomas wants his girl. Zende believes that Thomas will honor their family code and not move in on his girlfriend. Paris was supposed to be subleasing Thomas’ apartment. However, Thomas’ attempt to buy a house fell through. Paris insisted that Thomas stay as her roommate until he finds a new place. However, Thomas is certainly taking advantage of that. Thomas is determined to make Paris see what she could have with him. Who will Paris choose in the end, Thomas or Zende)?

The Bold and The Beautiful’s Thomas says he isn’t obsessed with Paris like he was Hope Spencer (Annika Noelle). However, Thomas and Paris have a natural attraction between them that cannot be denied. As much as Paris wants to be with Zende, she cannot help but be attracted to Thomas as well. Will Paris break Zende’s heart like Zoe Buckingham (ex-Kiara Barnes) tried to do? Will Thomas become completely obsessed like he did with Hope? Thomas has done some pretty underhanded things. Can Thomas be stopped if he begins to obsess over Paris?

The Bold And The Beautiful Spoilers – Thomas Forrester Admits His Feelings

The Bold And The Beautiful’s Thomas will admit his feeling to Paris. Thomas doesn’t care that Paris is dating Zende. Thomas isn’t thinking about Zende at all. All Thomas sees is the attraction between himself and Paris. If Zende meant that much to Paris, she would not be wanting to spend so much time with him. Paris is good with Douglas Forrester (Henry Joseph Samiri). Paris has helped with Douglas’ homework as well. Can Paris walk away from the family she is making with Thomas and Douglas? Chances are that Thomas will use Douglas to try to keep Paris with him. Will Zende’s heart be broken all over again by a woman who wouldn’t commit to him?

Paris is obviously not settled or she would not consistently be looking for someone else. Will Paris decide to see where things go with Thomas instead of Zende? Has Zende lost yet another woman because she cannot make up her mind?

Toddlers And Tiaras Spoilers: What Happened To The Toddlers?