B&B Spoilers: Deacon Sharpe Is Back, And He And Sheila Team Up! 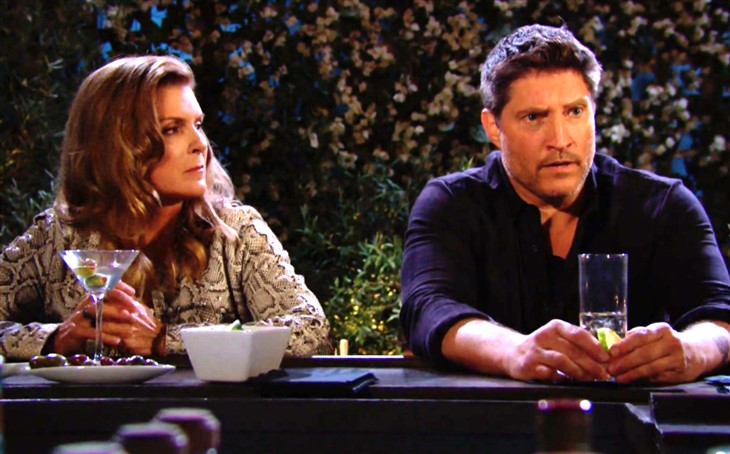 Longtime viewers of The Bold and The Beautiful will recall that Deacon was convicted of taking shots at Quinn Forrester (Rena Sofer). He spent four years behind prison bars, and completed his time. Upon his release, viewers of The Bold and The Beautiful will recall that the first place he went was the cabin that Hope Logan Spencer (Annika Noelle) lives in with her family. Longtime viewers will recall that Hope is the product of the relationship between Deacon and her mother, Brooke Logan Forrester (Katherine Kelly Lang). Hope had been writing him in prison, which was strongly frowned upon when she invited her mother and her husband Ridge Forrester (Thorsten Kaye) to the cabin and Deacon was there. The elder Forresters, as well as her husband Liam Spencer (Scott Clifton) had much the same reaction to Hope’s welcoming her birth father home and corresponding with him as they did over John “Finn” Finnegan (Tanner Novlan) having anything to do with Sheila, his birth mother!

in any scenes or storylines together, Sheila recognizes him and calls him by name – and he recognizes her, too. With both of them having connections to the Forresters that probably isn’t all that surprising. The two of them find that they have a lot in common, not just having done prison time, but having children and grandchildren they want to have a chance to bond with and be a part of their lives!

Viewers of The Bold and The Beautiful will be interested to know that ironically, according to an article in the current edition of Soap Opera Digest, their portrayers, Kimberlin Brown and Sean Kanan have known each other in real life for years but had never had a chance to share the stage together. Neither was surprised by the showrunners’ decision to team them up. Both characters are ostracized and hated by the Forresters, and both have children and now grandchildren that they want to have a chance to get to know! They think the storyline is going to be fun.

For Deacon, Hope is a lot more welcoming but even she was pressed upon by her family not to have anything to do with him, and she kept secret that she had been writing to him for years – and possibly even sending photos of her child! Hope totally understand being judged – she has been fearful of being judged for wanting to know her birth father! However, Deacon was released early on good behavior which is a plus for him – even he doesn’t know how dangerous Sheila is, or his perspective of giving her a chance is based on knowing how judgmental the Forresters are. Longtime viewers of The Bold and The Beautiful know that of the two of them, Sheila has earned her bad reputation much more than Deacon has. She’s definitely much more dangerous than he!

Days Of Our Lives Spoilers: Chanel Dupris Will Try To Sleep With Eli Grant!

The Family Chantel Spoilers: Chantel Jimeno And The Cheating Scandal