The Young and the Restless (Y&R) spoilers for Thursday, March 5, tease that Billy Abbott (Jason Thompson) will have another deep discussion with Amanda Sinclair (Mishael Morgan). In her hotel suite, Billy talks about Amanda making him happy. She deserves to be happy, too. Amanda wants to know how on earth she’s supposed to be Billy’s answer to anything. It’s all been such a mess.

Billy grabs some snacks from the vending machines and munches with Amanda. She’s apologetic since she’s really been angry about Ripley Turner (Christian Keyes). Billy concedes Amanda might’ve been taking it out on him a little, but she thinks she did it a lot. After Billy pushes about their bond and a fresh start, Amanda seems uneasy. Billy contends that they don’t have to make any huge decisions right now.

After Billy settles in on the couch, Amanda wakes up startled after a nightmare. Billy joins Amanda in bed and cuddles up behind her. At the Chancellor mansion, Chloe Mitchell (Elizabeth Hendrickson) frets over her baby coming before his lungs are fully developed. Kevin Fisher (Greg Rikaart) is concerned as well, but the doctor has good news over the phone. It’s a false alarm; these are Braxton Hicks contractions. 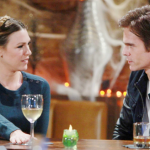 The Young and the Restless Spoilers – Chole Mitchell Has more Pain

Chloe rides out a few moves waves of pain before going up to bed with Kevin. That gives Michael and Lauren the opportunity to get busy downstairs. They’re under a sheet when Chloe returns unexpectedly and shouts. Kevin runs in and looks displease by the sight in front of him. He takes jabs at Michael before going back upstairs with Chloe. Michael calls out that it’s the best storm ever.

Meanwhile, Devon Hamilton (Bryton James) remains stuck at the new clinic with Elena Dawson (Brytni Sarpy) and Nate Hastings (Sean Dominic). They hear a noise, which leads to Devon bringing in a wounded young man named Jared (Michael Maclane). Jared’s arm was stabbed by jagged metal after his grandfather’s store was robbed. He reluctantly accepts Nate and Elena’s treatment for his injury.

The docs want Jared to make sure he gets a tetanus shot at the hospital tomorrow. Once Jared suddenly takes off, Elena decides she’ll find Jared tomorrow and offer more assistance. She reflects on how many people there are to help and is buzzing with planning possibilities.

Devon shares a tender moment with Elena soon after. He confesses he’s been thinking about the child he would’ve had with Hilary Hamilton (Mishael Morgan). The baby would’ve become a toddler by now. Elena’s sympathetic and thinks Devon would be a good father. She snuggles him as they sit together.

At the cottage, Mariah Copeland (Camryn Grimes) guesses Tessa Porter (Cait Fairbanks) got back on Tanner Watts’ (Chase Coleman) private jet and flew far away from her. Sharon Newman (Sharon Case) doesn’t think so since the plane couldn’t fly in this bad weather. Faith Newman (Alyvia Alyn Lind) pipes up that perhaps Tessa’s off writing a song.

Sharon goes upstairs briefly and seems worse. Mariah can tell Faith’s upset, so she convinces her little sis to confide in her. Faith is scared and feels like she worries constantly. She misses how things were before and wishes they could go back. Mariah gets that and pulls Faith into a warm embrace.

Sharon reappears looking awfully sick in her robe. She’s battling more nausea and fears she may have a fever. If she does, Sharon insists Mariah and Faith will have to find some way to get her to the ER.

The Young and the Restless spoilers say another action-packed episode’s in store. We’ll give you updates as other Y&R details emerge. Stay tuned to see what else is brewing in Genoa City.