The Young And The Restless Spoilers: Tension Thick At Lily’s Dinner – Devon And Nate On Verge Of Explosion 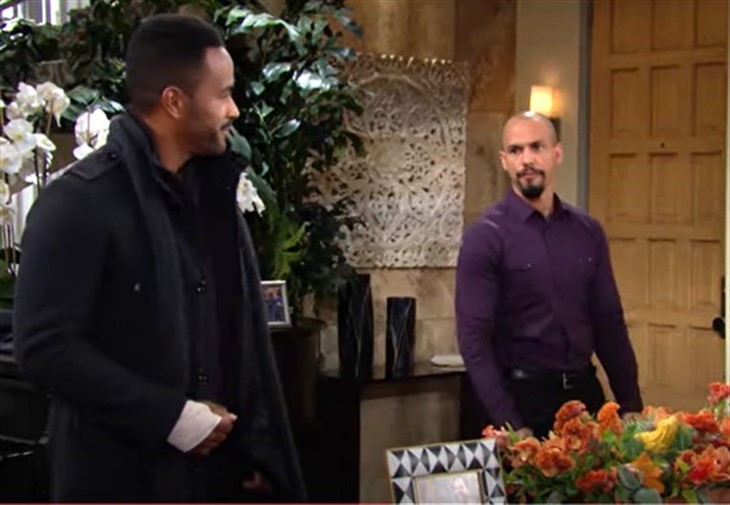 The Young and The Restless spoilers tease that in Genoa City, Wisconsin the tension will be thick at Lily Winter’s (Christel Khalil) Thanksgiving meal, with, and Amanda Sinclair (Mishael Morgan) possibly all being there at the same time! Devon and Nate will definitely be – will they play nice after Lily unexpectedly has to leave?

Brother and sister Devon and Lily set up family Thanksgiving plans, and they agree to have their Thanksgiving dinner at Devon’s place. However, as far as inviting anyone else, they kind of each go their own way and don’t really communicate their plans to each other until the day actually arrives and the table is set!

Devon has decided to let Amanda Sinclair (Mishael Morgan) his fairly newly discovered sister-in-law know she’s family and she is welcome for Thanksgiving dinner at his place. Amanda has told him she might drop by for dessert although she’s not sure about coming for the big meal. He lets Lily know that Amanda might be dropping by, and Lily is fine with that.

She then tells him she hopes he doesn’t mind that she has invited Nate! Nate, after all, is their cousin and he should be included too. Devon doesn’t even get a chance to think about it or react to the statement before the doorbell rings, and Lily goes to answer it, and there’s Nate!

Nate knew he was coming to Devon’s place so he is obviously not going to be as blindsided as Devon! Viewers of The Young and The Restless will recall from recent episodes that Nate has reached out to Devon a couple of times and asked forgiveness and tried to make amends for carelessly having sex with Devon’s ex-girlfriend, Elena Dawson (Brytni Sarpy). Devon, however, has not yet come to the point of forgiveness. The only thing that would make the evening even tenser is if Elena were to show up too!

Lily chastises “the boys”, reminding them that each other is the only family that they have, and for today, they should be grown up enough to put their differences aside. She also reminds them of how short life is, bringing up what happened to Devon’s wife, Hilary Hamilton (Mishael Morgan), and their father, Neil Winters (Kristoff St. John).

Their mother, Druscilla Winters (Victoria Rowell) has been dead even longer. The point likely hits home with Devon, since he was the one who invited Amanda because she didn’t have any family except him as a would have been a brother in law! Things will go along pretty well as both Devon and Nate interact probably more with Lily than with each other, pretending everything is okay when it’s really not.

There are hard feelings on both sides since Devon’s tackling of Nate at the Grand Phoenix on the night Devon won a community service award injured Nate’s hand, probably permanently, and that’s on top of the betrayal Devon feels over Nate’s having sex with Elena. Then Lily is unexpectedly called away – and has to leave to handle something, likely at ChancComm. Will “the boys” manage to behave themselves in the meantime, or might Amanda walk into a war zone when she arrives?