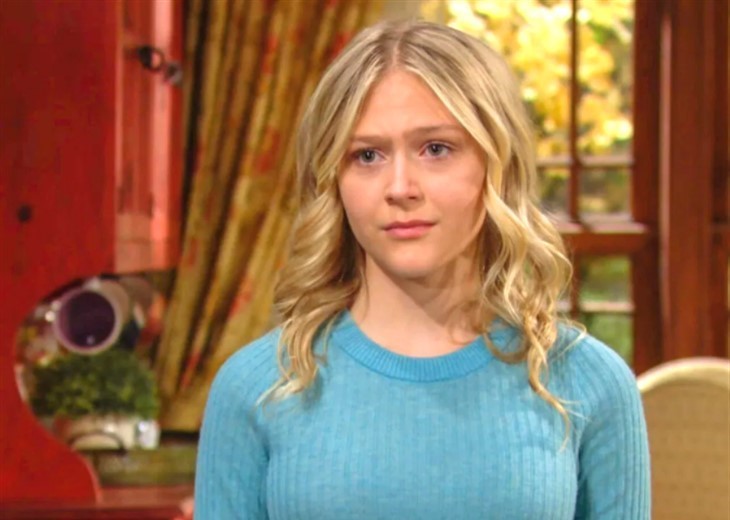 CBS The Young and the Restless spoilers tease that Genoa City, Wisconsin teen Faith Newman (Alyvia Alyn Lind) is on a collision course with danger—make that vodka (again). Explosive show spoilers reveal that the troubled and troublesome teen will be cajoled into stealing booze from by her bad influence friend Jordan (Madison Thompson).

Faith has reason to want to drown her sorrows as the mean kids keep making fun of her. The last text she got compared her to a clown and it doesn’t look like the bullying is about to end anytime soon. But could Faith’s rebelliousness spell doom for Shey?

Faith’s troubles began after Billy Abbott (Jason Thompson) published an expose of Adam Newman (Mark Grossman). The scandalous story included the juicy tidbit that Adam baby-swapped Faith and of course her peers found this endlessly entertaining material to taunt her with.

The great issue with her partying with the older crowd is that this is exactly what her sister Cassie Newman (Camryn Grimes) did many years ago, and it ended in tragedy.

Y&R Spoilers – Cassie Newman Is Gone But Not Forgotten

Young Cassie was dying to be a part of the teen scene and literally did die because of it. She heroically drove a car so an inebriated friend wouldn’t get behind the wheel after she snuck off to a party one night. Sadly she crashed the car and did not survive her injuries. Will Faith suffer a similar fate?

It seems unconscionable that the writers would go there again, and rain heartbreak down on parents Sharon Newman (Sharon Case) and Nick Newman (Joshua Newman). Their lives were nearly destroyed by Cassie’s death and if the same happened to Faith there is no telling what trajectory their lives would take in 2020.

Faith will be goaded into stealing alcohol and she could get busted by the last person she would imagine—her soon to be stepdad Rey Rosales (Jordi Vilasuso). He takes his badge seriously and if he saw Faith breaking the law it’s doubtful he would look the other way.

But how would Sharon react? If Rey busted Faith would Sharon take that as a deal breaker for their upcoming nuptials? No soap wedding goes off without a hitch, so is Shey about to go bust before they say ‘I Do?’

The Bold And The Beautiful Spoilers: Paris Gets Zende – Zoe Stuck With Carter