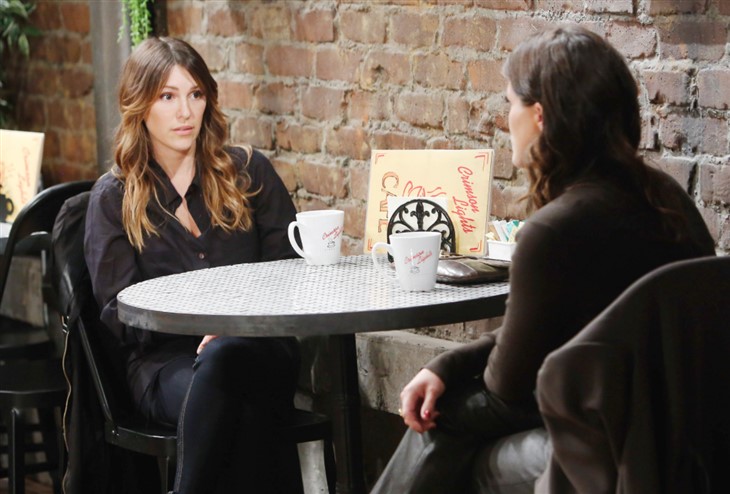 The Young and The Restless spoilers tease that in Genoa City, Wisonsin Chloe Mitchell (Elizabeth Hendrickson) will continue to worry about Chelsea Lawson (Melissa Claire Egan) after her fainting spell in Crimson Lights on a recent episode of Y & R.

The Young And The Restless Updates

Chelsea blew off her fainting episode that scared Chloe so bad as stress. She claimed that after her fall in the elevator, she went to the emergency room and tests were run, and the doctors found no concussion. She also told Chloe that this time she also went to the emergency room, and while test results were pending from blood draws, again they found nothing when a computerized tomography (CT) scan was taken.

However, it was obvious that Chelsea was experiencing pain near her left temple as she rubbed the area immediately before falling to the floor at Crimson Lights. It may also be significant that her hand shook immediately before she rubbed her head, although a shaky hand can come from stress as well, in addition to migraine-like headaches. Undoubtedly she did wind up in the emergency room after the fainting episode because

Chloe likely would have ridden the ambulance over there with her! She would not have taken no for an answer in seeing that Chelsea got properly checked out after such a scary episode! Chloe was worried that the incident could have happened because of Chelsea’s fall in the elevator, and she said so! However, if Chelsea suffered a mild traumatic brain injury that was contained inside her skull, which it would have been, the CT scan may not have picked it up.

Did Chelsea Newman Faint, Or Could The Incident Have Been A Mild Seizure?

Chelsea could have experienced a mild seizure. Seizures can be caused by head injuries, whereas fainting is not. The fact that blood tests were taken may be significant. Traumatic brain injury that cannot be picked up by a CT scan can show up as a protein in the blood, although an MRI (magnetic resonance imaging) test, which shows much more than a CT scan, may show more.

Chloe will be concerned about Chelsea’s safety, knowing that even if the fainting is caused by stress, she could be by herself and faint and be hurt worse if she falls! What if Chelsea is driving a car and she faints? What if she falls and doesn’t regain consciousness? Worse yet, Chloe has called to check in on her best friend and she hasn’t been answering or calling her back. Now Chloe worries that her psycho boyfriend Adam Newman, (Mark Grossman) or Wilson, or whatever he’s calling himself these days has done something to harm Chelsea!

Chloe doesn’t trust Adam as far as she could throw him, and that’s certainly not very far…she’s a tiny little slip of a woman and Adam is a pretty good-sized man! Maybe she could trip him…at the top of a flight of stairs…if the circumstances were right and she was forced to. But for now, she worries about Chelsea’s safety for a variety of reasons! The fact that she’s not answering her phone or returning her calls only makes Chloe’s anxiety worse!